In this article, you are going to see some really peculiar sea creatures that will scare the s*it out of you and will make you ‘wow’ yourself until you spill your guts! But it’s also very important to know them… ( in order to know what bites you when you take a night swim, right?). So, below I’m going to present you the

Weirdest creatures discovered by fishermen all over the world

Roman Fedortsov works on a fish boat in Murmansk, North Russia, and he is really fascinated about fishing the strangest creatures found on the bottom the sea. For usual people, the creatures that end up in his nets are creepy and seem quite dangerous, but Roman has no problem with taking amazing photos while playing with them… Check out the photos below and try to keep calm till’ the end! 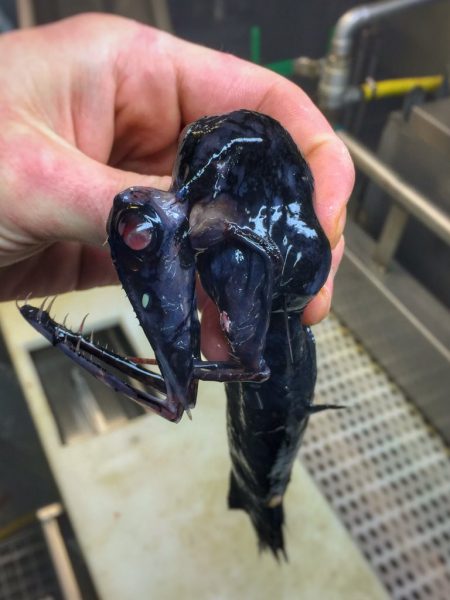 Most of these fish are found at a depth of 200 to 1,000 meters below the surface, where sunlight never shows! 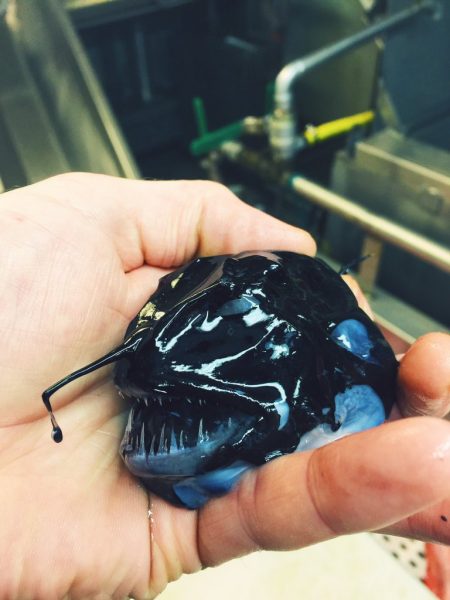 Roman posts all his creepy discoveries on Tweeter and he even shares (just with his followers) the species name. 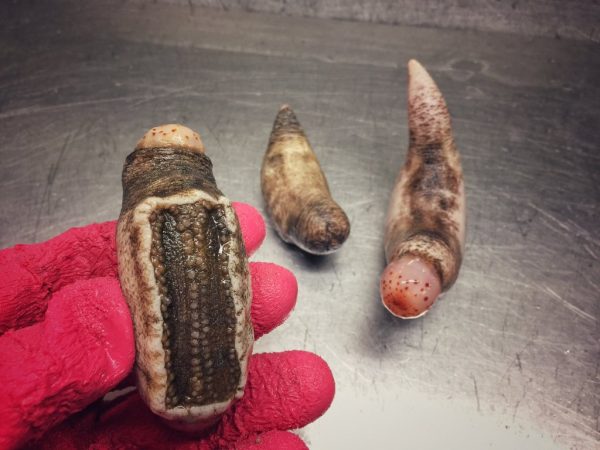 Besides the bizzare fish discoveries he made, Roman has such courage, to take this kind of photos, by holding the creatures with his bare hands! 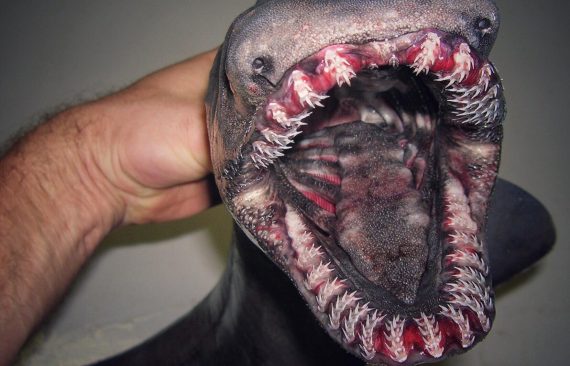 This weird hobby that Roman is practicing brought him great popularity on Tweeter, and if he decides to quit his fisherman job, he can use these creepy creatures to create a unique horror movie! I’ll be freaked out! 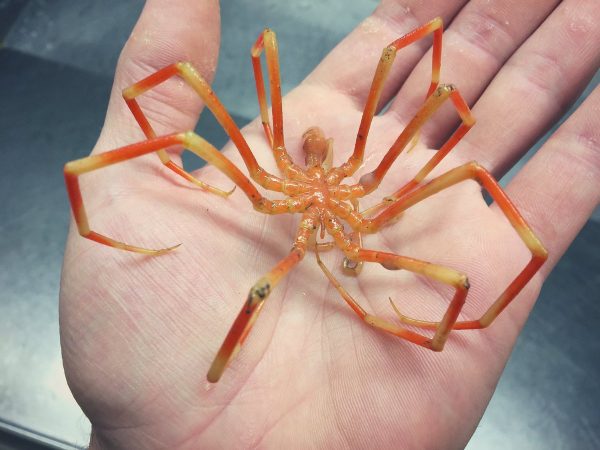 Whatever those creatures are, they are so creepy they need to be cast back to the nightmare they live!

Mathew Wallace, from Palmdale, California, is a crab fisherman who was shocked by his new discovery made on a usual work day. Matthew caught a weird sea creature while he was crab netting at Port Hueneme Pier, near Oxnard, in California. The peculiar sea creature he found looks like a barnacle on the outside, but it has creepy tongue tentacles, teeth, and some weird brightly colored flaps! and best of all, it’s freakin’ moving like in an alien movie! 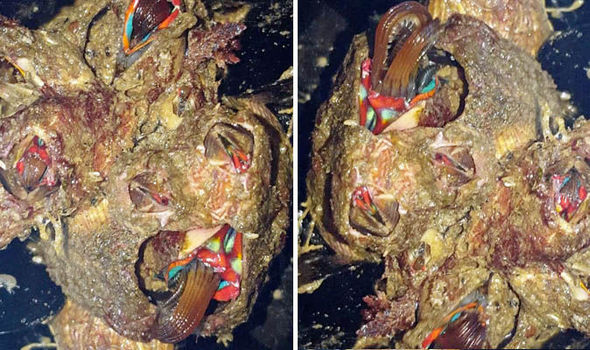 He uploaded these photos on the internet, and shortly he became very popular but with all these, nobody was able to identify the origins of this peculiar creature. Specialists said that the deep-sea creature is cataloged as a barnacle and a marine biologist said that the creature’s colors are ‘extraterrestrial’

Scott Tanner comes from Lunenburg on Nova Scotia’s South Shore, and he is a great fisherman. He was on board when his crew pulled up a really creepy fish that looks like a bird-fish but much creepier. It got some devilish green eyes and a long, pointy snout. When they pulled up the creature, everybody stopped from their activities and start starring at the amazing catch. No wonder, its a hell of a bird from the deep waters! 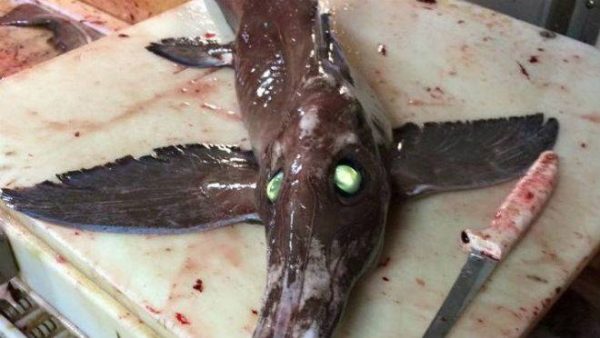 Scott took some amazing pictures and uploaded them on the internet, and, of course, it became viral pretty quickly. The peculiar fish is believed to be long-nose chimera or a knife-nose chimera, but it can only be found at the bottom of the sea. Check out the .

An unusually shaped fish was discovered by a Chinese fisherman in the coastal waters of Zhoushan city in China’s Zhejiang province. It kind of looks like a dolphin-whale-crocodile creature and it’s pretty scary! The specialists said that the fisherman discovery might be a beaked whale, a rare fish species that live in the deep sea. Check it out. 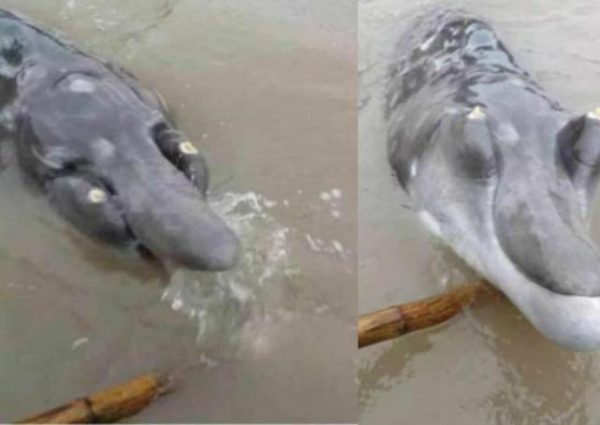 The fisherman also filmed the moment when he pulled up the creature from the water! It is unknown if the creature ended up in an expensive restaurant or back where it belongs. Such a creepy discovery you made, dear fisherman! Something like the unicorn of the seas

A New Zealand fisherman, Stewart Fraser, made an unusual discovery when he was reeling in his lines off the coast of New Zealand. As new faces are popping out from every corner of the world, Stewart was one of the lucky guys who caught a very peculiar deepwater fish, unlike anything we had ever seen in the ocean. 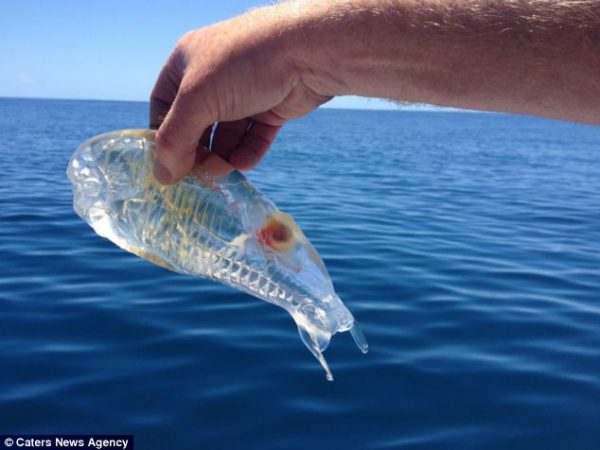 The translucent jellyfish it’s actually known as a salp. It uses his translucent body as a form of camouflage, as it can be found in the ocean in large groups that form a unique long chain. Cool! (check out the largest jellyfish here) 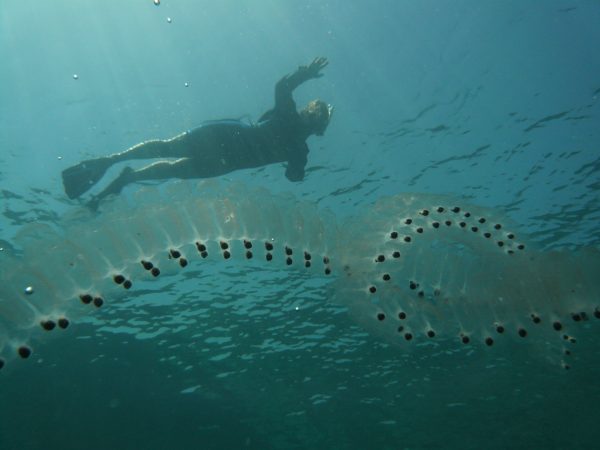 The discoveries above are amazing, and can’t stop pondering on how big and full of secrets our world is. Maybe you’ll find it scary, maybe it looks amazing – but no matter what you believe, peculiarities are what defines our planet.

Written with love and coolness by Anamaria Nichita on April 25, 2017 in Weird Stuff How do you rate this article?