Viewer discretion is advised for the pictures you are about to see.
Nowadays, it’s getting a lot easier to prove the existence of monsters and mythical creatures. And if you thought that the Chupacabra and the Montauk monster were just fairy tales, you should know that a mix between the two has been found on the shores of a San Diego beach, and it looks devilish.

The creature found had really vicious-looking fangs and a blonde mohawk on the top of its head. Unfortunately, the unidentified monster was found dead and decomposing on the beach, wrapped in seaweed. The creature was 2 feet long, and from the description of the person who found it, it’s hairless body resembled the one of a pig.

During a trip in San Diego, Josh Menard found the creature dead on the seashore, and due to the fact that he wasn’t a San Diego native, he just assumed it was a local animal. What he found odd is the fact that he looked just very weird: “The monster, cryptid, Chupacabra/Montauk or whatever you want to call it, was about 2 feet in length, had the body shape of a pig, a flat stomach, and the canines were ridiculously large.” Its appearance made him think that this was a mutant rat. Since the photos were made public, this monster has been dubbed the San Diego Demonoid.

The pictures rapidly spread across the internet and some agree that the animal in the pics could be the carcass of a chupacabra. But the creature looks more like the so-called “Montauk Monsters” which are almost hairless creatures with very big fangs. The first such monster washed ashore in Montauk, New York, in 2008. Some of the “conspiracy theory” believers think that the monster is the result of scientific experiments gone bad.

See some other weird unidentified creatures by footprints

Have a look at the pictures below, and see for yourself, what do you think this dead monster is? 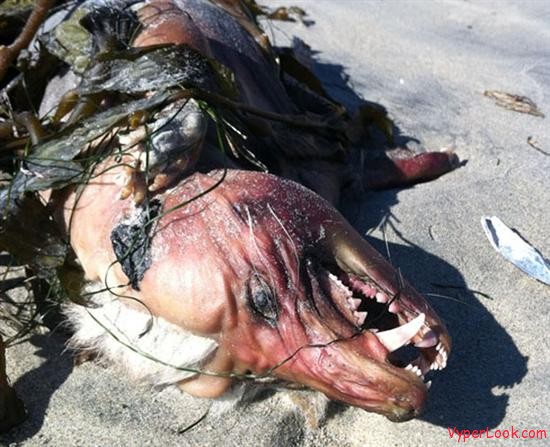 Written with love and coolness by Marius on February 9, 2012 in Weird Stuff How do you rate this article?