6 videos and incredible images of fishermen encountering sharks up-close! 6 Terrifying cases of shark encounters and boat attacks! Prepare yourself for some adrenaline!

What is your biggest fear? Darkness, or maybe bugs, spiders or ghosts? What about finding yourself meters away from a huge shark that can swallow you within seconds? Isn’t that scary enough for you? Well, it is for me!

I’m going to present you 6 cases of fishermen’s shark encounters which will surely make you think twice before taking a night swim in the ocean! (See also World’s Strangest Creatures Found By Fishermen). If until now you thought that a boat in the middle of the ocean is safe, it means you don’t know the dangers underneath it. People get killed or bitten by sharks near the shore – imagine that, being in their territory, is twice more dangerous.     (See also 8 Cases of People Swimming with Sharks)

Enough with the scary talking, because in the cases below nobody died or get injured, but they surely lived the moment with full adrenaline in their blood. (See also Incredibly Peaceful Encounters with Sharks Caught on Camera) 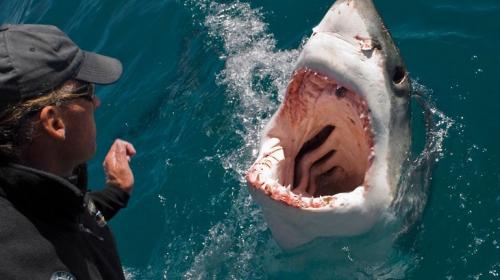 Check out the next 6 terrifying sharks which came to fishermen! 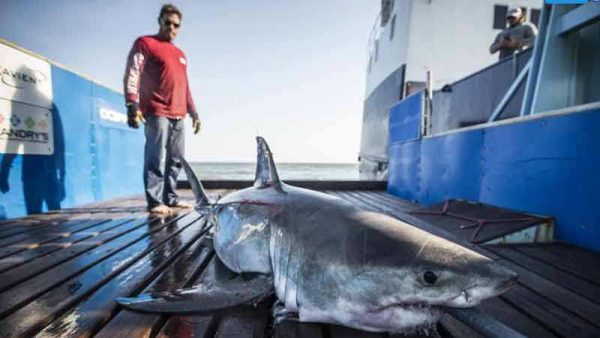 On March 2017, Jannick Schroder had a very unpleasant visit on his fishing boat! He encountered two huge sharks and captured the moment on camera while fishing near Wrightsville Beach.  Schroder and his friends were bottom fishing when one of their baits raised interest for one of the Sandsharks.

He fought bravely to reel the shark in for about 35 minutes, and when he got the shark on the boat, Schroder said they were all frightened about his size. No wonder!

Jannick said the other shark was almost 3 meters long and maybe 10 times bigger than the one he reeled on his boat. (See also World’s Biggest Shark Ever Captured)

He believed the shark was a Great White, and after finding a tooth in the boat’s engine cover, specialists identified the tooth as one from a Great White. 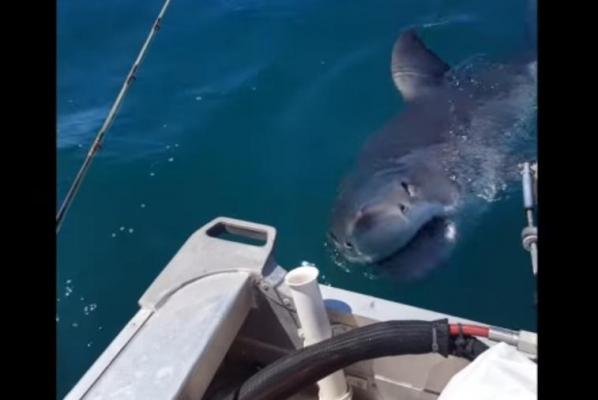 In March 2017, Sean McCormack, a New Zealand fisherman encountered a Great White shark while fishing on his boat. Sean was fishing in Red Beach, north of Auckland, on a small boat, trying to catch his dinner, when he encountered the huge shark circling around. After getting on the shore, he refused to make his encounter public, in order not to create panic among other fishermen.

He said for the local news that as from nowhere, the shark took the burley bag he was using to lure fish to his location and started to go around his boat like surrounding his next prey for few long minutes. The shark was almost 3.5 meters long as you will see in the video he captured during the ‘peaceful attack’. Sean captured the moment when the shark broke his line, stole his fish, and knocked into his boat with its tail before leaving. 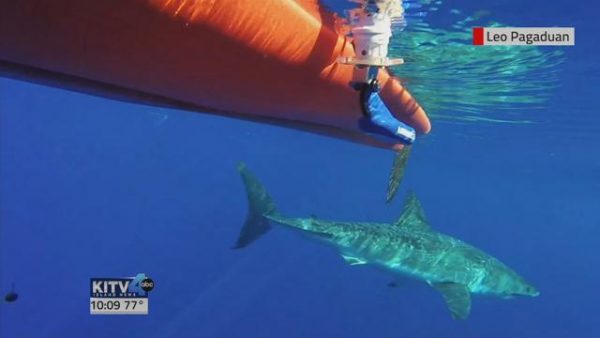 In March 2017 a Maui fisherman encountered another Great White while fishing on his boat near Ukumehame Beach Park in West Maui, on a Saturday morning. Leo Pagaduan faced one of the most feared creatures of the ocean, and caught the whole moment on camera! When Leo noticed the shark was circling him, he took out his GoPro and began to record the 1-hour long encounter.

Leo said for the local news that he went through some very hard moments as when he believed the shark was gone, suddenly he reappeared under his boat. The shark was 3.5 meters long like Leo said ‘ the shark was as long as my kayak‘ and for approximately an hour he repeatedly surrounded his boat. After the shark swam away, Leo stayed for some time in the same place, worrying that the shark will follow him to the shore. 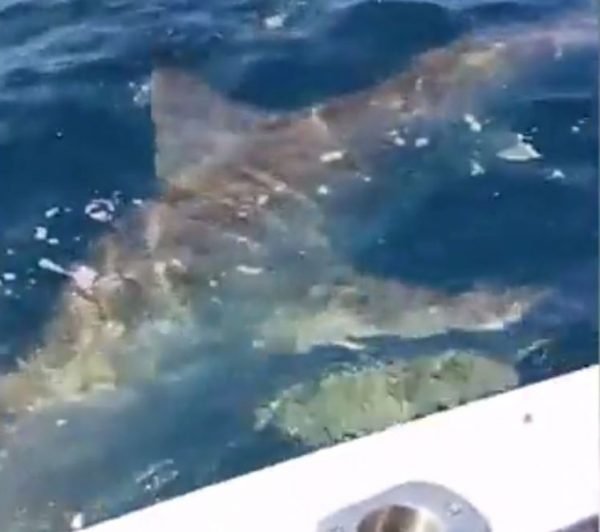 In September 2016, Adon Samoilenko had a terrifying encounter with a Great White during his relaxing time on a fishing boat. The four-meter shark swam to his vessel and strike the motor. Adon got really scared, but not enough as he took out his phone and recorded the whole moment.

After recording the encounter, Adon decided to leave the place as he was, frightened by the fact that the shark followed the boat all day long! He believed that another boat might be angered the shark and he was seeking for some revenge.( See also 4 Real Attacks of the Great White Shark Caught on Camera) 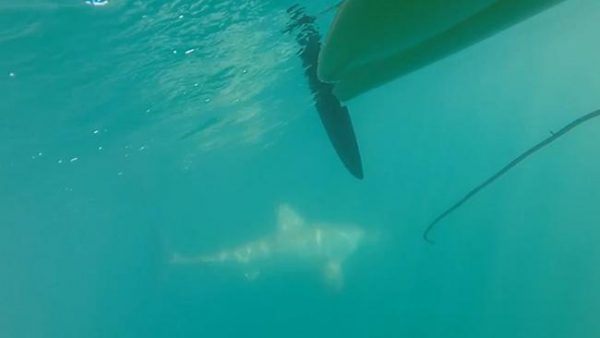 Michael Robertson surely didn’t expect to face a Great White in a relaxing fishing afternoon. In September 2016, Michael was fishing on his boat when he suddenly realized that a bigger fish was following him. He nervously looked over the shoulder and saw the huge shark getting closer and closer to the boat.

Sticking his video camera underwater, he finds out that the ‘big fish’ that was following him was actually a 4-meters Great White shark! After a few minutes of clear vision over it, the shark disappeared – a fact that frightened Michael: ‘It’s better to see it than not know where it might be’. He finally decided to leave that spot and head back to the shore. 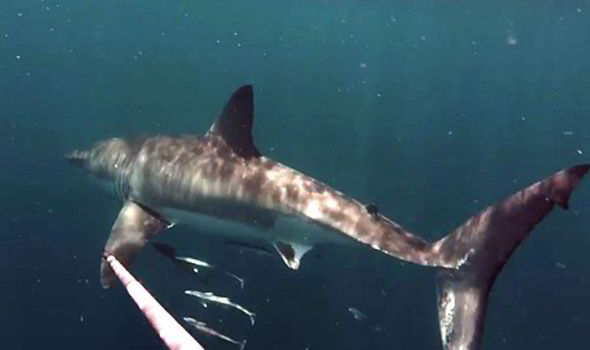 Zack Spurlock was recording his hunt for Spearfish, when a very unexpected friend came to say ‘Hi’. Yeah, he faced the most frightening predator of the ocean: The Great White! Even though he got scared to death, Zack managed to record a great footage of the dangerous encounter.

Zack was enjoying a beautiful fishing afternoon with hid daughter Ali and his friend Joe Penovich in the sea at Port Canaveral in Florida, USA. While Ali was waiting for her dad in the boat, Zack was living the most intense encounter with a Great White. When Zack took the camera from the boat, the shark already surrounded him three times. When he started recording, the shark appeared from behind, giving Zack a pretty good scare.

Wild animals, sharks, and other possibly dangerous animals have unknown reactions when it comes to human trespassing their territory, so I think is better to stay away as much as possible in order to keep your life safe!

People think they have the right to kill animals – even sharks, without any consequences, but animals know we are harmful to them, they can feel the danger, so they protect themselves using predator instincts. Not their fault.

Written with love and coolness by Anamaria Nichita on May 26, 2017 in Amazing Stuff How do you rate this article?