Even tho sharks next to swimmers are definitely a big problem, I have to ask: which are the most cold-blooded creatures:  the people swimming with sharks next to them or the sharks themselves? You have to admit that being surrounded by a bunch of natural killing machines, especially in deep waters, is not the most relaxing experience that one can have!

People Swimming with Sharks Around and Behind Them

A German Model Is Suddenly Accompanied by a Large Shark 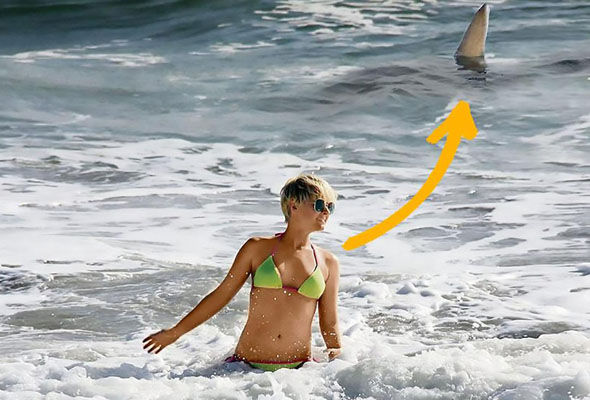 A German beach model has told the press about her frightening experience when she unknowingly came within inches of being eaten alive by a massive tiger shark! The woman, Simone Gutsche, was roaming in the warm waters of Cape Canaveral in Florida when the gigantic monster showed up as a shark swimming behind her. 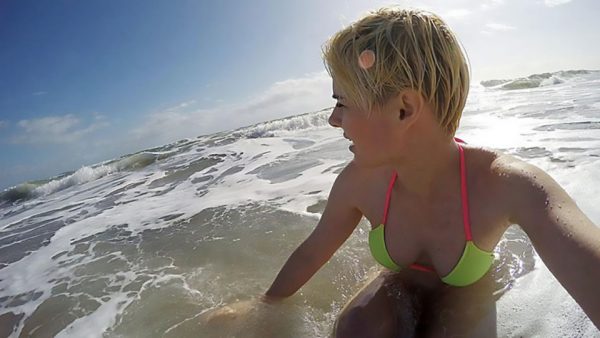 The terrified people who were close by quickly tried to attention the model to get out of those waters. But she believed that the concerned wavers were just being happy (comforting, right), so she waved back without any clue about what was really going on!

That’s a bit hilarious for the watchers, but it was in fact life threatening!

The lucky 34-year old female said that there was nobody in the deeper waters, so no swimmers could help her. That scary images show the scene where the 15 ft-long shark was swimming behind Simone and its threatening fin appearing out of the water. Luckily, she gradually noticed that something was wrong and came back to the seashore, in time. 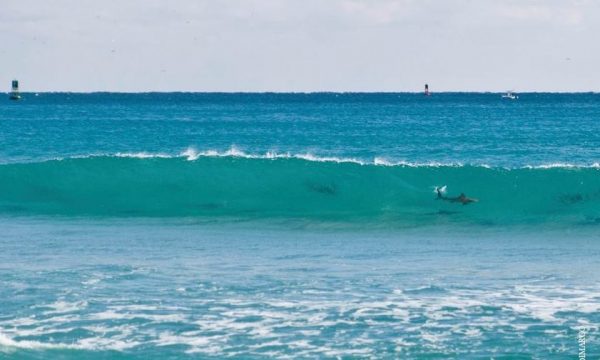 A couple of years ago, a man from New Smyrna Beach recorded a video showing sharks swimming nearby a few young people during Memorial Day, posting it on YouTube, where the clip has gained a certain degree of notoriety. The video presents the shark hiding off the shore in deep waters, but very close to the area where people are allowed to swim.

The couple who filmed the entire dangerous scene was out paddling near the seaside during their vacation. It was the end of the week when they observed close by a group of twelve sharks possibly threatening the bathers, swimmers, and youngsters. Here is another short viral video that shows us the terrifying experience of being close to these real forces of nature:

According to the bystanders, there were giant fish swimming all over that area and the bathers were going near them, so they had no idea about the danger beneath. For those filming, the scene was an amazing one, but terrifying for others. 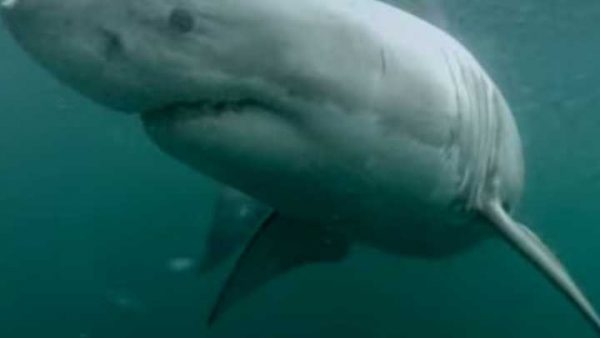 A diver got about as near as a human can get to another white shark during his short adventure in the Sydney Harbor. The occurrence, taken on a video recorder, shows a swimmer moving off a harbor close to Sydney and diving into the deep waters with a GoPro camera attached to his head.

A large shark appears out of nowhere and the man goes back underwater and begins moving away even if the muffled shouts are heard as soon as he understands the imminent shark danger near him. The fish is swimming by, but it does not seem to be very interested in the diver, who is heading straight to the seaside. That was one lucky close shot!

The Death of an Austrian Man Sparks Underwater Safety Debate 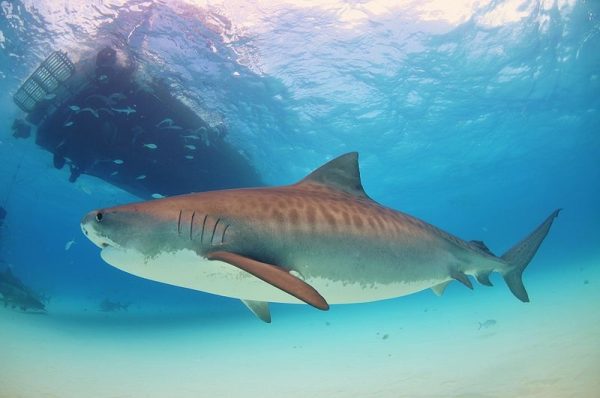 The loss of life of an Austrian vacationer attacked during a planned shark safari in the  Bahamas has sparked in 2008 discussions about the protection needed for such risky activities. Markus Groh was a 50-year-old attorney from Vienna and was on a vacation with other nine divers onboard the Shear Water. The charter boat was going from Florida and marked the start of the shark-safari adventure on Feb 24, 2008.

He was attacked by a huge bull shark and was transported by an American coastguard chopper to a healthcare center in Florida at 40 miles away. The coroner who examined the dead body discovered that the lawyer had passed away from the loss of blood. As we can see in the , there have been others too who got close to death, presenting horrific shark attacks caught on tape! 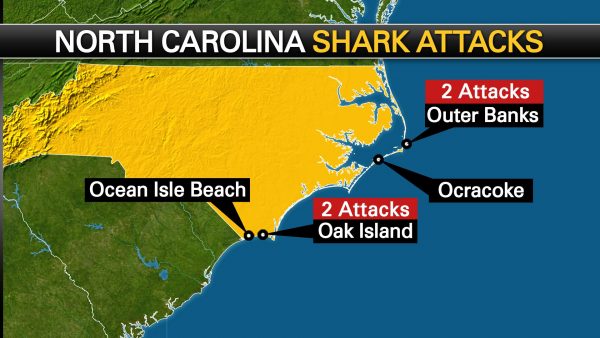 In June last year, seven people were attacked by sharks all over North Carolina, during the course of just one month! In the latest shark attacks, authorities affirmed that the sufferer was diving near a lifeguard dock when a massive gray shark, measuring almost ten feet in length, pulled him even deeper and bit the diver on the ribs, hips, calves and both arms. Terrible! Among the previous victims, there was a teenager near Waves – a child diving in the shallow waters of Surf City -, a couple of young people attacked by large sharks close to the shore of Oak Island who had their arms amputated! Geez!

A terrifying video was taken of a woman unknowingly swimming with a groups of sharks just feet away!. The unidentified person was swimming off the shore in Cape Town when the sharks started to circle around and below the board. The swimmer was seen seated on the board with both legs clinging in the shallow water and she even felt off into the ocean at a short distance from five Bronze sharks. The real life situation from the movie The Shallows

The aerial pictures were taken by an aviator who was traveling with his helicopter above the seaside when he saw the woman below him. The pilot said that he counted over 20 sharks during the journey across the shore that day, so he naturally felt anxious for the swimmer when he realized how near she got to the large sharks. Unfortunately, not all people can be shark whisperers like the girl below who is swimming relaxed, carried by a shark’s fin (hurray!) 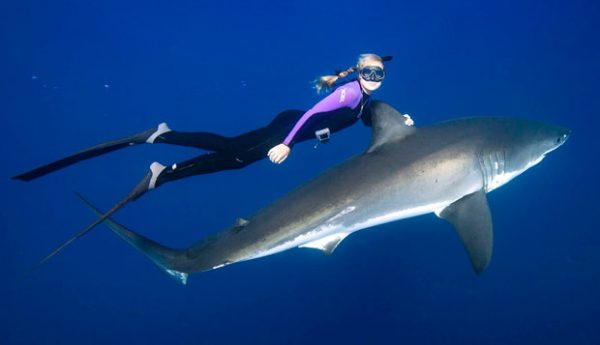 Another Viral Video with People’s Close Encounters with Sharks

Another video posted on YouTube presents a couple of friends diving in the deep waters of El Porto in California when suddenly a great white shark appears out of nowhere. One of the divers has a GoPro action camera mounted on him, so it is easy to understand the shock and fear experienced by the pair of daredevils when they see the giant fish roaming underneath them! See other shark close encounters

Fortunately, the shark disappears in the foggy waters as sudden and quick as he came by. It probably had its stomach full, otherwise, our swimmers would have been in great danger, considering the fact that the great white sharks are among the biggest species of fish – countless movies were based on their reputation of ‘apex predators’. Remember ‘Jaws’? Yeah, me too!

For the thrill seekers, the adrenaline level is rather high compared to normal people. Fortunately, Fiji provides the necessary materials to build an exciting experience. There they have built an underwater reserve situated off the shore, around the area of Beqa, so people can go diving with almost ten varieties of sharks. Pretty awesome! 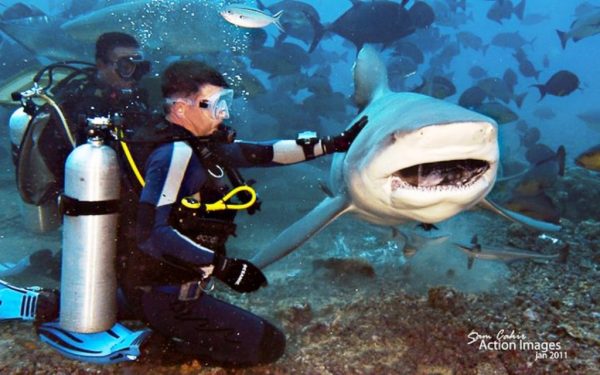 To help fund the shark studies and pay the regional villagers for their missing fishing places in Beqa, the organizers provide snorkeling adventures into the underwater reserve with sharks swimming freely around people. Contrary to the common misconception, shark strikes on humans around the globe are extremely unusual, as the fish attack only in exceptional conditions. I guess these people didn’t hear about the New Bizarre Walking Shark

As for the number of shark attacks, these are even scarcer, around 1 in 3.5 million to be more precise. People are more at risk to die when searching metal in the sand on the seaside! So, next time when you see a shark, remember that. If you can…

Sharks have been on this planet for hundreds of millions of years and will continue to be so, unless people will keep destroying their natural habits. However, as much as we admire these majestic beasts from a distance, we would not like to be surprised the way this guys got photobombed all of a sudden.

However, as much as we admire these majestic beasts from a distance, we would not like to be surprised the way this guy got shark photobombed all of a sudden! 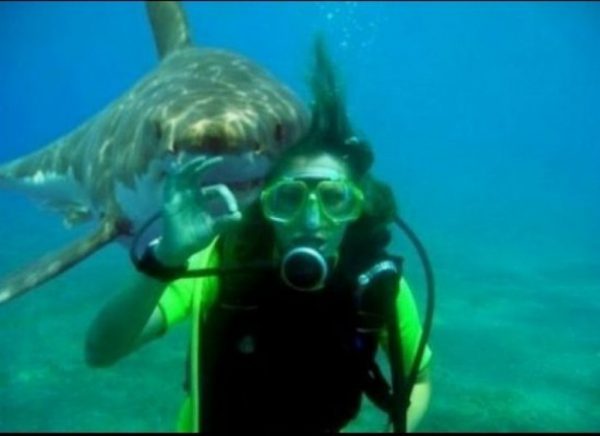 Please don’t forget: sharks are not enemies for humans!

Written with love and coolness by Gabriel on December 19, 2016 in Amazing Stuff How do you rate this article?