We all know how dangerous a shark can be, but the Big White Shark is one of the most dangerous species of sharks in the world. There are reported around 75 attacks of the Great White Shark every year. This amazingly strong predator can reach when matures 21 ft and weight about 3,324 kg. Its only natural predator besides human is the Orca.

Recently, the Great White Shark dared to attack a boat full of people. They lived an experience that they won’t easily forget. The crew that was on board did a rookie mistake that almost cost them their lives. 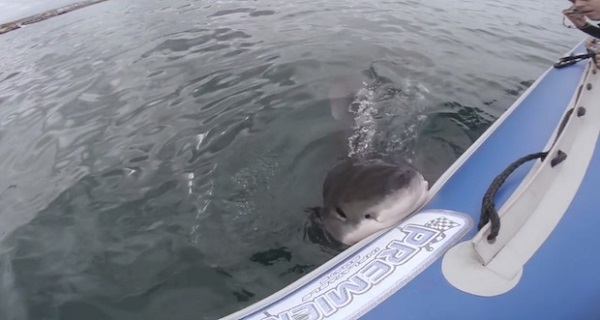 The crew was shooting a film documentary in the waters near the South Africa, when they experienced more than necessary. The inflatable boat they used to sail near a group of sharks was suddenly bitten by a big specimen of Great White Shark.

The razor sharp teeth of the shark sinking in the boat scared the crew. 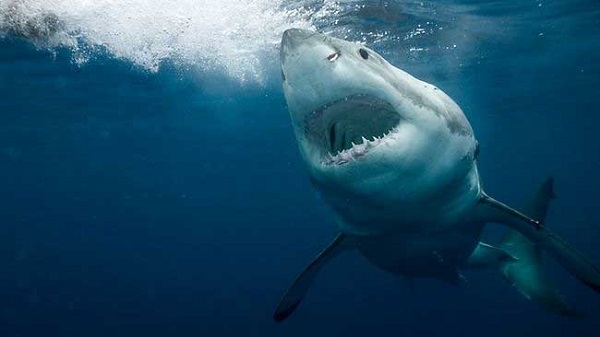 What is interesting is that the white sharks don’t attack the boats unless they are lured to it. The experts believe that the shark did not have predator intent, but it was just exploring the boat and chomp it out of curiosity.

However, it is important to understand that using an inflatable boat to explore the waters where sharks swim is not a smart move.

Below you can watch the entire moment when the shark attacked the boat:

Below you can read about other attacks of the Great White Shark.

Related: People swimming with sharks behind them

The next event happened in the waters near Australia. This shark was probably tired of catching its own pray so decided to get a fresh fish meat from the fishing boats in the nearby.

The fisherman tried to scare the shark away with different weapons, but it didn’t go away until it got what it came for. We advise people to buy bigger and safer boats when go fishing near great white sharks.

We could assume that the great white shark is either enjoying gummy toys or it hates them. This episode is featuring a huge Great White Shark attacking a small inflatable boat. The serious problem is that the driver is still on board and tries to escape. Watch other shark encounters with fisherman in 2017

He safely escapes the shark’s strong denture by rapidly climbing on one of the bigger boats in the nearby. Below you can see the entire footage of the event.

3. Make him eat right out of your hands

The next story is taking this quotation quite literally. While shooting a fishing material, this fisherman felt how it is to feed the great white shark. He was sailing with a kayak and fishing yellowtail near New Zealand.

The good part is that the shark wanted only the fish from a man’s hand. No one was harmed in this story, but we bet the fisherman will remember over years how a shark ate straight out of his hand.

We hope that these stories are teaching people to use bigger boats and don’t sail carelessly the waters where the Great White Shark lives.

Written with love and coolness by karrinah on May 9, 2014 in Amazing Stuff How do you rate this article?