The amazing moment when the clouds break and the rain falls as an outbreak – check out the amazing cloud outbreak and other 7 amazing stories:

First, check out the incredible minute when the rain falls like rocks from the clouds.

The surveillance cameras installed on skyscrapers in Montgomery caught on tape more than the overall view of the city.

What it first looked like a normal sunny day with clouds here and there, turned out to be something amazing to the eye. 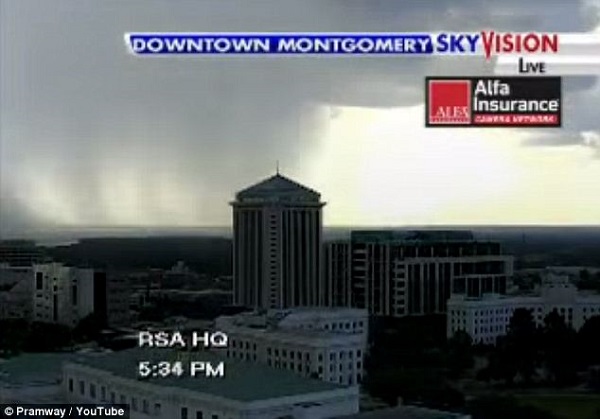 We believe this is what it looks like to witness the flood. Huge masses of water suddenly fell from clouds on a small area.

The phenomenon is not unusual. The water vapors are held in the clouds in huge quantities. When the clouds encounters warm currents of air, the vapors condense and small drops of waters are formed and they fall on the ground.

It seems that the encounter of the water vapors and the warm current has been violent. 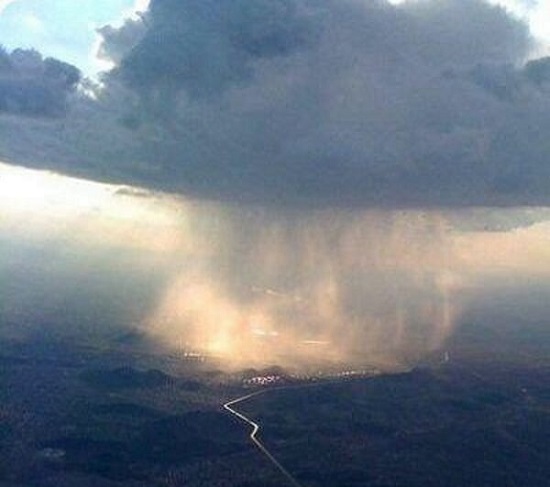 In the images caught on tape, you can see that in just a few minutes, a massive cloud appears and the outbreak begins. It has been reported that this phenomenon occurred several times in that day, in this area.

Below you can see the entire video about the amazing outbreak of the clouds:

Next, read about other outbreaks of the nature caught on tape.

The following footage is impressive. You can see the entire system clouds and the whole zone where it rains.

The video was filmed by a passenger of a Boeing plane while flying above the state of Florida. You can see the sunny side where the sky is clear and blue and the gloomy part where it’s cloudy and it heavily rains.

2. Rain outbreak on the sea

The next phenomenon resembles a beautiful oil painting rather than the fury of the nature. The tourists who were sailing on a boat next the coast of Havre de Grace. The people went sailing when they spotted a beautiful localized rain in the sunset.

What made it beautiful was the sunset light which as projecting beautiful shades of pink and purple on the gloomy clouds. More amazing is that the dreamy storm is sprinkled with lightnings and thunders.

Check out below the beautiful show caught on camera on the sea:

NEXT: Read about the huge lightnings, fire tornadoes and more

1 2 3
Written with love and coolness by karrinah on May 17, 2014 in Amazing Stuff How do you rate this article?