In November, 2014, several people from a town near Melbourne, spotted a strange phenomenon in the sky. It seemed like a hole in the clouds from where you could see a wide rainbow.

Many persons believed it’s a sign of the apocalypse. Until now, nobody has seen this type of clouds before.

But the scientist have a logical explanation for the colorful clouds and it’s far from an upcoming apocalypse. They say the phenomenon is cause by differences of temperature in the water droplets from the clouds and the environment. Also, the beautiful color is called <<iridescence>> and it’s a common effect also noticed in soap bubbles, sea shells and butterfly wings. 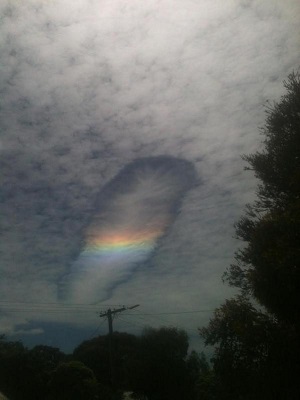 Below you can watch a compilation of other amazing phenomena of the weather and nature. Prepare to be amazed.

1 2 3
Written with love and coolness by karrinah on May 17, 2014 in Amazing Stuff How do you rate this article?