A woman went to buy  a Kebob Cobb wrap for lunch and while eating, she saw a bug crawling out of the sandwich : “I went to Chopped [sic] for lunch today and ordered a Kebob Cobb wrap and as I was eating it an alive bug came crawling out of my sandwich!!!!!!! I was so grossed out that I took the rest of my sandwich back to chopped and they refunded my money and said they try to clean the lettuce. Just want to get the word out there that if you go to Chopped you may bring back a bug!!!” 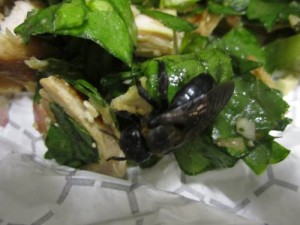 Eating at a restaurant is a nice and relaxing way to hang out, especially when travelling. It’s the case of two women who went out to eat some enchiladas and found a roach in the dish. That made the women wonder: “How many of these… have we eaten?” 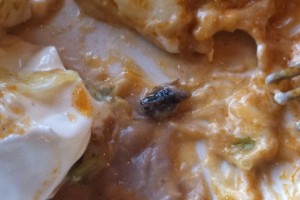 As student, we all know that you have no time  to cook  and you rather go to fast food restaurants. Same do five students who went out to eat cheeseburger at Covel Commons dining hall. But little did they know that there, the main ingredients are… insects like cockroach or crickets. 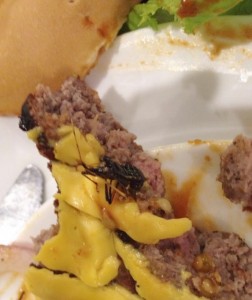 Chinese specialities include exotic ingredients but cockroach may be a little too much even for this type of food.

Shirleen Albino Bautista went at Meylin Restaurant and ordered something to eat but she was able just to watch the dish, as it didn’t look that yummy with a cockroach inside.

As soon as she got home, she posted a warning on a social media website: “Too bad we frequently eat in this restaurant. Now we know what their special ingredient is. We will never go back to this restaurant. Please share and let the others know about this. “

“Shrimp lo mein” should change its name in some bug-related one. A man founded the leg of an insect in his food and he thinks that he have already eaten the rest of the bug’s body.

Noodles… “umm”!!! At least that was what a customer felt like when eating noodles. However, this ended up quickly after she discovered an insect in her food bowl.

“Madam Yue-E took a closer look, saw the insect, picked it out from the noodles and discovered that it was moving. The insect was very thin, small and only about 0.5 inches unlike the size shown in the picture shown on the stomp posting of 8 May 2013 ” officers said. 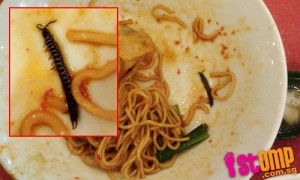 17. “Safely ” packed noodles…not so safe for the dead insects

read about more cases on the next page