Kirstin Hole is a 20 year old girl from England and she is just 5 fee and 2 inches tall. Why is her height relevant you ask? Well, maybe because she caught a monster catfish, who happens to be a record breaker. The slippery thing was 7 foot long and weighed 120 pounds… The girls declared that she felt like she was pulling in a bus, rather than a fish, but hey… stranger things have happened. The girl stroke a lovely pose with the obligatory picture with the monster, and then returned it to the water alive and well. While we’re on the biggest catfish subject… here’s the record holder for biggest catfish caught by a man: a whooping 9 feet long fish who currently holds the record for largest freshwater ever caught. It was captured in a small village from Thailand, and despite the villager’s efforts to keep the beast alive, it died, and was cooked and fed to the villagers. This species of catfish is listed as “critically endangered” by the IUCN (World Conservative Union), so its death was gravely regretted.

See a of how a huge monster catfish is fished out of a river.

This giant stingray also comes from Thailand and it was caught during a National Geographic expedition. The fresh water monster weighed an estimated 550 to 990 pounds (250 to 450 kilograms) and it was reeled in on January 28th, 2009. The stingray’s body was 6.6 feet (2 meters) wide and approximately 6.9 feet (2.1) meters long. Unfortunately, its tail was missing, but if the fish had had it’s tail, its total length would have been around 14.8 and 16.4 feet (4.5 and 5 meters). The fish was released back into the wild.

See a video of another giant Stingray below: This particular Chinook salmon was found by biologist Doug Killam in Battle Creek, near Anderson and it is the largest salmon in the world, being 51 inches long and weighing 88 pounds. To get an idea why this fish is a monster, a normal salmon weighs between 20 and 30 pounds. See pore pictures of it below: We all know Jesus fed 5000 people in the desert with just 2 fish and 5 breads… Well, this giant conger eel is 10 feet long and two of these make feeding 5000 people more plausible. The water monster was caught off the British coast, and weighed weighs a hefty 100lb (45kg), while as a normal one weighs just 5kg and is around 3ft. Read more about this lovely but humongous shark here. The shark was caught on February 7th, 2012 it was 40 feet long and it belongs to a special species of sharks called wale sharks. See a video of it below:

Related: People Swimming with Sharks Behind Them This is a huge Pacific blue marlin, which weighed 1,656 pounds and it was caught in 1984. This 17 foot marlin is the largest to ever have been caught in Kona, Hawaii, but only the second largest to have been caught by rod and reel. The fishermen struggled with it for two hours and 20 minutes. This monster was caught in Sweden, it is 12 feet long and was found washed ashore. See a video of another exemplary from this species below: Here’s a giant oarfish that washed ashore in Cabo San Lucas, on the beach of Hacienda. Apparently, the locals saw the fish struggling to get back into the ocean, and they rushed to help it, but unfortunately, they failed to help the 6 meter long creature go home, and it died. As previously stated, this species can reach lengths of 17 meters, so this one was quite small compared to others. And are you ready for some terror? A 600 pound Black Marlin gave the struggle of his life instead of going down without a fight. And he was well inspired too, because after jumping aboard and slightly injuring the crew, the poor fish was released back into the waters to roam free and enjoy life. Luckily for us, the whole thing was caught on tape! So let’s check it out:

Vasile Pupeza is the man who caught a catfish that weights 120 kg and 2 meters long. The man was fishing in a lake near the Parco delle cave.

The locals said that sometimes, a dog or a duck went missing from the shore of the lake, but nobody could tell where the animals disappeared. Till some people called the Romanian fisherman to catch the “monster.” 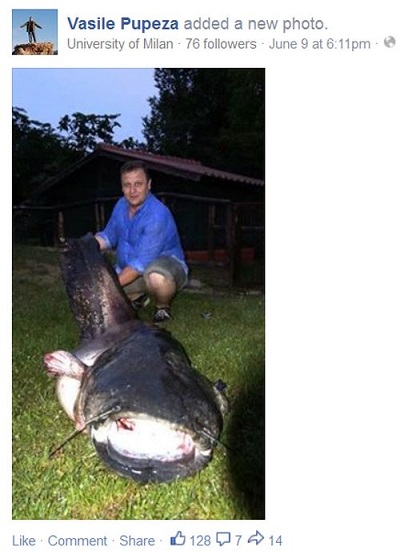 The people who live in the nearby fear that this huge fish might not be the only one and there are more amazing monsters who swim in the lake.

Written with love and coolness by Marius on August 12, 2012 in World's Biggest Things How do you rate this article?