Have you ever been tempted to get naked (don’t get too nasty thinking about it!), run on a beach in the middle of the winter (sounds pretty cool, huh?)  and then jump in a frozen sea (you had your brain stuck for a second, right?) No…? Then you need to cheer up and do it! I know you’ll probably say that I’m crazy as I’m not thinking about consequences, but hey… we all have one life! Not convinced? Let me tell you about swimming in cold water benefits.

Maybe swimming in frozen water seems like a crazy thing to do, but did you know that there are so many good things about it? I bet you won’t believe, but hear me out. First of all, regular exposure to cold water improves your immune system! Ya’ all may think that cold water will shut down your body, but here are the specialists who say that swimming in frozen water strengthens your body!

Secondly, you’ll maybe think I’m a bit weird, but let me tell you that crazy freezing water enthusiasts had their sex life improved! Yeah… I know, crazy, right? Probably you heard that many men looking to fatherhood put their testicles in cold water every day (damn!). So, it is proved that cold water increases the level of testosterone and estrogen.

Another benefit from swimming in frozen water is that (ladies be ready to read this!!!) you burn calories, so you lose weight! Isn’t that a real good reason for you to go swimming in cold water, right now?

Hopefully, I convinced you this is actually pretty healthy, so let’s move on. In this article, I’m going to show you some very brave men and women that experienced swimming on a very … not so suitable weather for a swim.

Now, check out the list below and be ready to feel some chills down on your spine! Haha 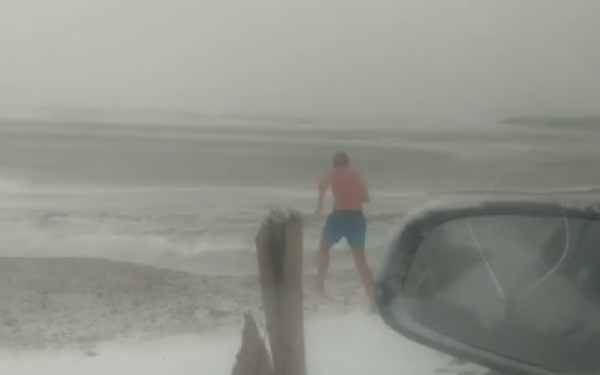 Already missing summer? Here you have the solution! Jump in the frozen Black Sea, you’ll sure remember how… much you miss summer!. Well, Paul is a marathonist, and this winter (December 2016) he decided that no water is too cold for him. In Constanta, Romania, the temperature was no higher than -23 Celsius degrees ( actually there were -7 but the wind made it feel like -23), so our buddy Paul decided to run on the beach and swim in the icy Black Sea.

His stunt was filmed by his friends who didn’t even had the courage to get out of the car ( neither would I, for the matter), but the moment was successfully filmed and uploaded on the internet! I guess he just wanted to prove his manhood without taking into account the possible dangers and consequences. Probably he got a nasty flu… 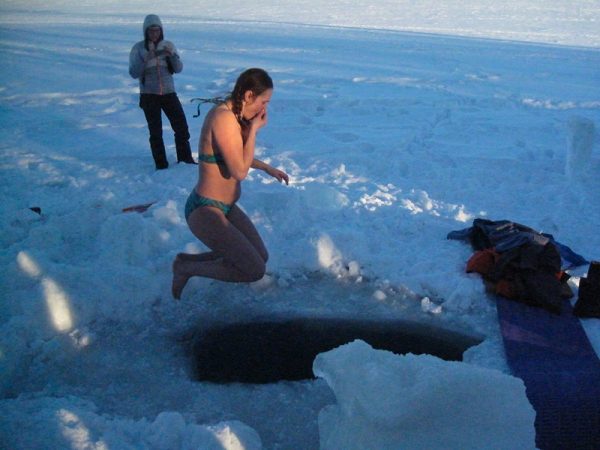 In 2014 Sveta Kovalchuk went on an extreme diving at icy Cedar Lake in Minneapolis. Sveta grew up in Belarus, and this extreme act was a tradition for her. After she moved to the Unites States in 2011, she wanted to carry on her tradition and nothing stopped her from swimming in the frozen lake. ( I think this is in her Russian genes!?) 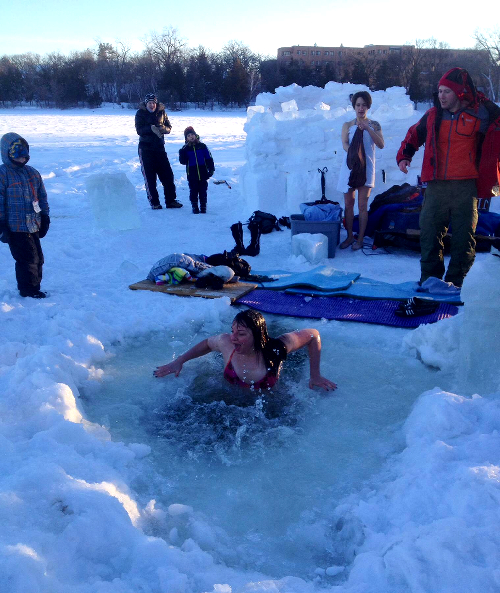 Even if she is proud that some of her Belarusian cultures have found its place in the U.S, Sveta said that jumping into ice-cold water is shocking, but very energizing and refreshing. After she showed her friends how cool and extreme her tradition is, more and more followers started to practice this so-called extreme sport every year.

Here you can see a video with Sveda friends who embraced her tradition.

Finland – best country for a dip in icy water 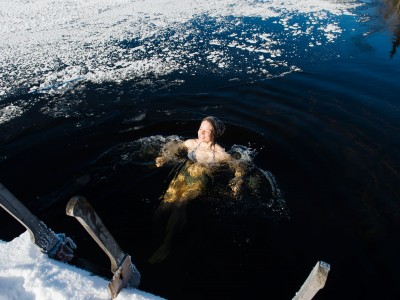 Living in Finland? Then let me tell you that you chose the best country for swimming in the frozen water! This woman, who was a tourist in Finland, tried to experience a traditional dip in the icy lake water. Maybe some of you will think that this is an extreme sport for masochists, but, actually, it’s really fantastic and refreshing.

Ice swimming has so many benefits so why not enjoy the occasion? This woman said that after this unique experience she felt less stressed, and, obviously, is going to it try again. She filmed her crazy experience, uploading it on Youtube, so check it out! Crazy, huh? 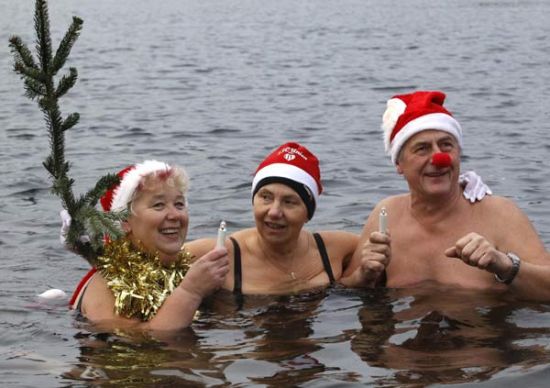 Members of Berlin’s ice swimming club “Berlin Seals” have a Christmas tradition to take a dip in cold waters, every year. The ice swimming session takes place every year on 25 December, as everybody seems to enjoy the benefits of this event! As you can see, the members of the club are seniors, but they are pretty courageous when it comes to extreme sports. They find this very relaxing as they keep doing it every year…

The photos are taken while the group was dipping in the cold waters of Orankesee lake! 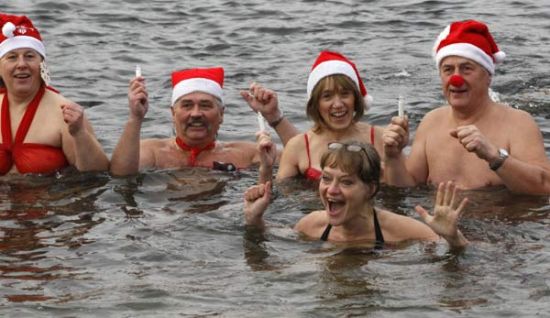 Here you may see the video made in 2011. The club has a lot of members and everybody seems to enjoy their Christmas tradition. 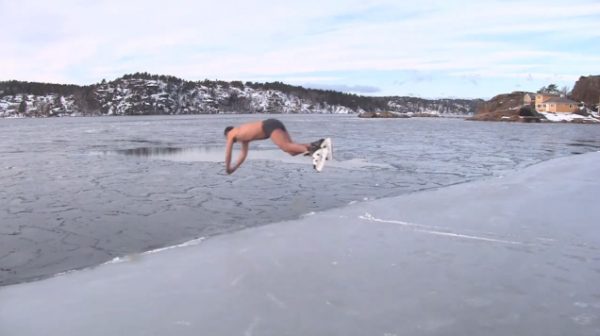 Aren’t you getting cold already? I mean look at this guy… he seriously loves winter, skating, and ice swimming. There are only 2 things I can think about: either he was drunk enough, or he just loves doing crazy stuff while filming. He seems so happy as he is having no problem with the cold weather! Check out the , it’s insane!

As many of you already figured it out, Russians are no strangers to cold weather and extreme crazy things. Winter swimming is very popular in Russia, especially because of the Epiphany ritual that takes place every year. Their courage is already in their hearts, so they only need some vodka and there we go: dipping in freezing water at -36 degrees Celsius.

In the , a group of Russians, members of a local winter swimming club, have their warm up on the bank of the Yenisei River… then guess what? Ice swimming time! 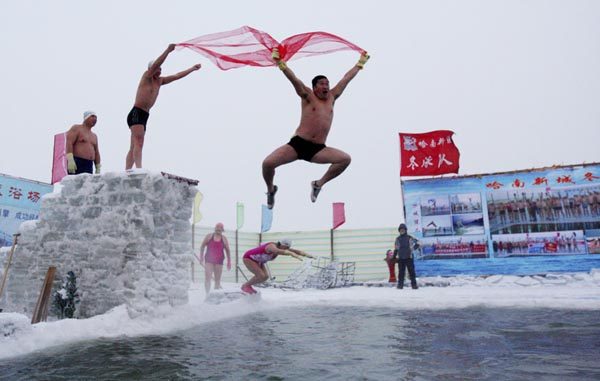 China is really into ice swimming! Winter’s ‘ice swimming game‘, a competition in the Songhuajiang River, is a very popular outdoor activity in northern China. They celebrate Harbin Ice Snow Festival by jumping and swimming in the frozen waters, which is an annual tradition. The competitors are racing in the icy river, in this competition where they also get prizes for their performances. Pretty cool!

In this you’ll see the crazy ice swimming race organized in 2013 in the coldest city in China, Harbin. 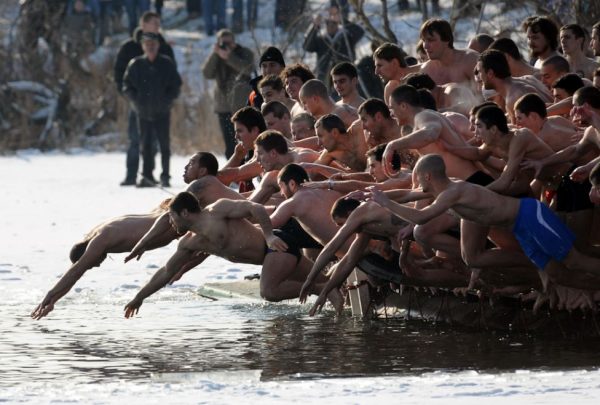 On January 6 every year, Bulgarians celebrate baptism day by taking a long dip in icy waters. It is said that, during this organized race, the winner is going to be healthy all year long, and nothing bad will happen to him. What a reason to go for winter swimming! I think those guys are true believers if they have the courage to jump in the frozen lake, every single year!

Check out the ! This is crazy!

Ok, now that I’ve told you about some benefits of swimming in the frozen water, obviously I’m going to present you the bad or the dangerous part – swimming in cold water dangers!

First of all, as many of you already know, Hypothermia is one of the many dangers that you can meet during an extreme swimming. You need to know what swimming in a frozen water involves, so do not hesitate to wear a special wetsuit and follow some simple rules that can save your life. Also check your heart before doing this. A weak heart may present a big risk.

It’s not that I don’t find this extreme acts as being ‘once in a lifetime’, but hey, it’s your life, so do crazy things every day if you want to! Now, how many of you can guess the number of shots they had before swimming? I would drink at least 5!

This article does not encourage crazy ice swimming, even if it has a lot of benefits, but, if you are curious about how it feels like, go ahead and DO IT! Don’t forget to share with us your crazy ice swimming because we love crazy, weird stuff!

Written with love and coolness by Anamaria Nichita on January 30, 2017 in Awesome Stuff How do you rate this article?