7 amazing cases of bizarre creatures found or discovered in 2018, which remain unknown. These mysterious creatures have a story and we’re about to tell it.

Were you afraid of monsters when you were little? What if I told you that these monsters exist in real life? Well…maybe not that kind of monsters that you are imagining right now, but some discoveries scientists made.

Check out these 8 odd creatures below:

A more common name for these species is also “dogfish“, more specific “Genie’s dogfish”, to honor Eugene Clark as “Shark lady”, who studied marine life until she passed away in 2015.

A new type of deep-sea shark with cartoonish eyes was discovered near Florida, in the summer of 2018. It is believed that the shark is genetically distinct from other species.

, “A lot of deep-sea sharks are shaped by similar evolutionary pressure, so they end up looking a lot like”, says shark biologist Toby Daly-Engel.

The creature was found on May 2018 by a Montana farmer who killed the odd animal on spot! Not that’d be a good thing…

After it attacked a man, the unknown creature was shot by a Montana farmer. State wildfire experts said they have been unable to pinpoint its species.

Insane theories have also circulated online since the pictures of this odd animal were leaked. Some think it’s a “dire wolf”, or a “dogman”, others think it’s a coywolf (a coyote-wolf hybrid), or a wolfdog bred in captivity and later released into the wild. Some even said that that was a werewolf walking among us.

Let’s see if the news caught Jacob as well…

Prepare yourselves to be horrified. A bizarre humanoid-sea creature was found alive in China in July 2018!

While some rushed to say that the strange thing may be a new species of sea life or a mutated starfish, others were skeptical and pointed out that it’s quite possible to be a mass of sponge, which the man is holding it may have been modified in shape so as to look vaguely humanoid.

I have to say, something does look fairly suspicious…

Imagine taking a walk on the beach and discovering an…alien?!

That was the case of Hanna Mary who was walking on the beach with her mom when she discovered the skeleton of an alienlike critter.

The strange corpus was met by Hanna Mary on November 2018 in New Zeeland, on a beach in Canterbury. Many discussions came across after she posted the pictures on social media.

“When I pulled it out and saw all the teeth and barbs I was convinced it was a rare deep-sea creature”, says Mary. She took several photos of the strange creature and turned to social media in hopes of discovering what type of species it was. No one knew for sure though.

While some were really creeped out about it, many compared it with an actual alien.

The video below explains more.

Well, that’s a title you don’t see every day. Cockroaches aren’t really news, but how they protect themselves from the evil wasps that try to paralyze them and turns them into mind-controlled zombies! That’s a really nasty fate, even for a nasty cockroach.

It was believed that cockroaches had no defense against these emerald jewel wasps until Vanderbilt University biologist Ken Catania discovered in March 2018 that they can deliver a karate kick that may save its life.

Turns out that the cockroach uses a swift blow with a spiny back leg to shut down its attacker. They literally kick wasps in the head, to avoid being enslaved. Wow, what?! They probably watched a lot of movies with Jackie Chan!

And if the images didn’t speak for themselves, here’s a video that shows how the karate-kicking works, and it’s pretty impressive!

The star of the show, the stunning fish named after the Greek Goddes of beauty herself – Aphrodite. It was found off the coast of Brazil on September 2018.

Imagine that: electric pink with yellow and bright green fins. You can look at it all day long, right?

The new species belongs to a small genus of coral reef fish in the family Serranidae. As an adult, they measure between 2 and 3.1 inches in length. The colors are different from male to females, males have alternating pink and yellow stripes while females have a blood-orange color. Also, Tosanoides Aphrodite is the first species of its genus to be found in the Atlantic Ocean.

Finally, we conclude with one creature that is more bizarre than unknown.

A quick walk along the beach, anyone? Nothing can go wrong… unless you suddenly meet a stranger! Not a usual one, but a pink-colored blob jellyfish looking like a… volcano! 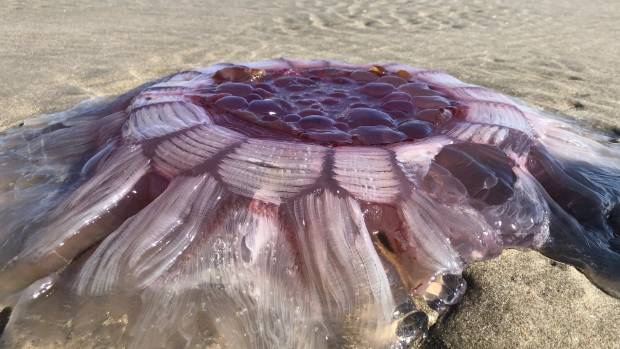 We all know that New Zeeland has so much to offer so there is no surprise when it comes to its underwater creatures.

Eve Dickinson was taking a walk with her family on Auckland beach when they saw this peculiar creature “[Jellyfish] were everywhere and we were pretty amazed. Then we saw this massive one that seemed different from all of the others”.

Later on, she found out what this impressive creature is:

The Lion’s Mane Jellyfish who was discovered last year is also known as the Giant Jelly or Hair Jelly but looks more recognizable underwater. They usually show up during the spring and summer because of the plankton which is – one of their favorite foods!

But be careful! If you meet one, you don’t want to touch it, even though it looks appealing! “They have a toxin in their tentacles which can hurt you if you get too close to them” according to Oceana.

How amazing is this?! Get to know them better in the video below.

One thing is clear, we live in a world full of amazing things! If you also found one, let us know!

Written with love and coolness by Maria-Alexandra Costache on July 13, 2019 in Weird Stuff How do you rate this article?