The transformation of these 10 girls who turned into Barbie dolls is seriously incredible! Human barbies before and after pics. Real cases of women who transformed into Barbie girls, thanks to many dramatic plastic surgeries to look like a human Barbie doll, wich changed them so much that they actually look like real life Barbies!

Is there such a thing as the perfect female body? and if so, should you be attempting to achieve it and why?

Since we were kids, ( girls mostly… I guess)  we dreamt about looking like a Barbie Doll, dressing like one, and have a perfect long blonde hair. Can we blame ourselves? Those Barbie dolls look so damn perfect!

Nowadays, maybe we are not kids anymore, but we still want to be different and beautiful; in other words, we don’t want to have wrinkles, a fat belly, cellulite and other ordinary problems that everybody deals with. So, in this case, what can we do to get rid of ‘imperfections’ that actually make us… humans? Maybe to have a ‘few’ plastic surgeries, a bit of botox, and some liposuctions…

I think you are here to see how the perfection looks like, right ? Or better said the ‘plastic perfection’. Well, if you don’t have a big amount of money to spend, then you need to watch without desire, because trust me, you will be amazed about how much money these crazy girls spent to become a real Barbie Girl. Girls, my personal advice is that, if you want a perfect look, you better work that body… in a GYM! But hey, that’s just me.

Now, I’ll show you that, when it comes to how a woman wants to look like, money doesn’t matter! Some women dedicated their lives to transforming themselves into living dolls.

Girls and women who turned into barbie girls 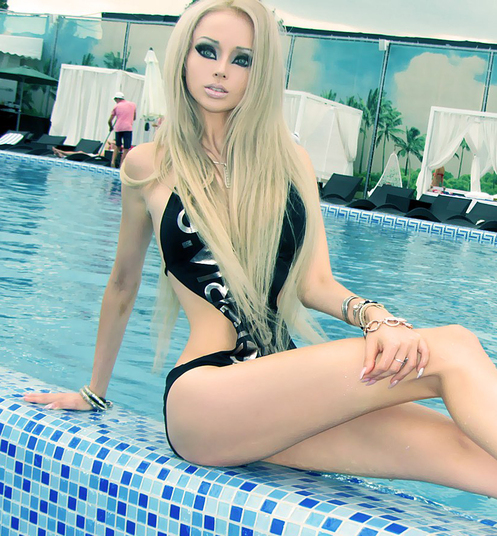 Valeria Lukyanova is a real life-sized Barbie! Such a mannequin! Can you see the differences between a Barbie Doll and Valeria?… Me neither. I’m am quite marveled about how perfectly shaped her body is: tiny waist, long legs, perfect ‘chest’, long perfectly combed hair and creepily disconcerting made-up doll eyes and face! Would you like to look like that, or do you think this is too…perfect?

Valeria is a Moldovan-born Ukrainian model and entertainer, and she became famous all around the world because of her thousand of dollars plastic surgeries which turned her in a Barbie girl. If you believe it or not, she was born on 23 August 1985 which means she is 31 years old…! Now she looks like a teenager!

Check out a before and after picture with Valerie! Pretty cute, huh?! 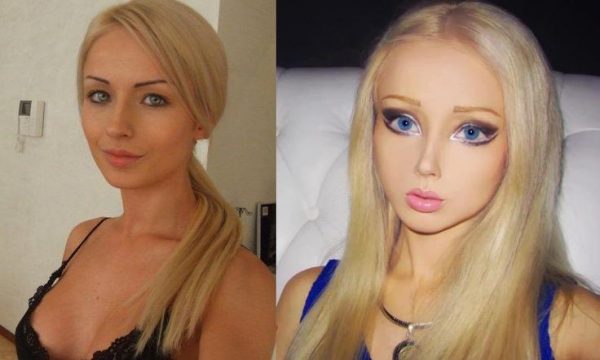 Check out her story in the 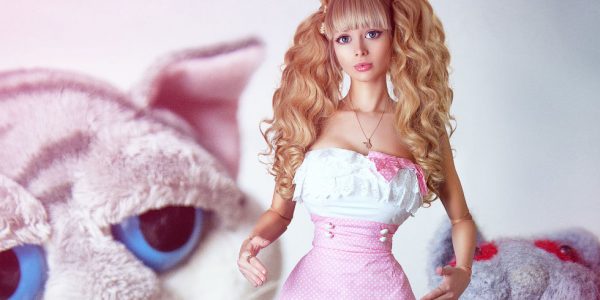 Angelica Kenova is a 26-year-old Russian girl. Have you noticed that she looks like a perfect beautiful Barbie doll? She claimed that she was raised by her parents to be a princess, and this is the first reason why she  became a living doll. Did I mention she is also a model? I guess you noticed that already by having a look at her perfect waist!

She insisted she never had plastic surgery, but can we believe her? I mean… Look at the picture below, the differences are pretty clear, you guys… Umm, maybe a miracle? Never stop wishing, girls! 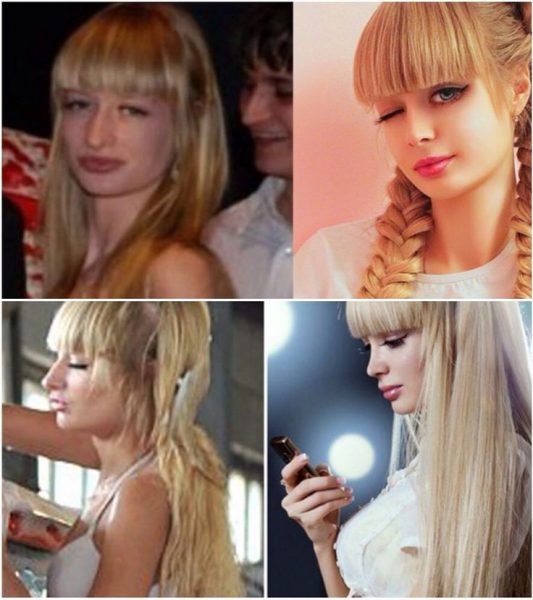 More about her in the 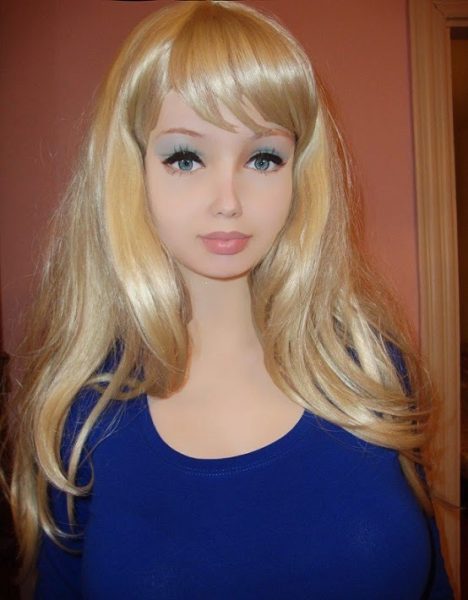 Another real-life Barbie Doll is Lolita Richi who also claims that she never had any surgery at all. She is almost 19 years old and she is from Kiev, Ukraine and now temporarily lives in Turkmenistan. Lolita wants to become a psychologist after she finishes school but would love to achieve fame for her look.

I find this ‘doll makeup’ rather impossible to make than a solution to perfection. How many hours do these girls spend putting their makeup on? How professionals can they be? Check Lolita’s before and after picture below! 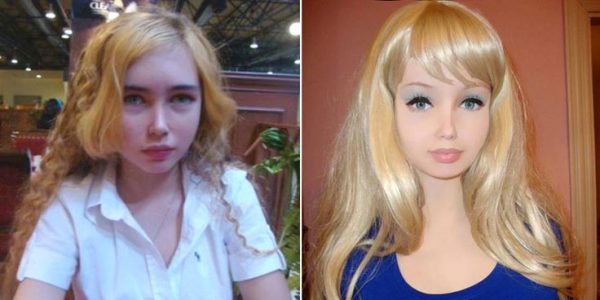 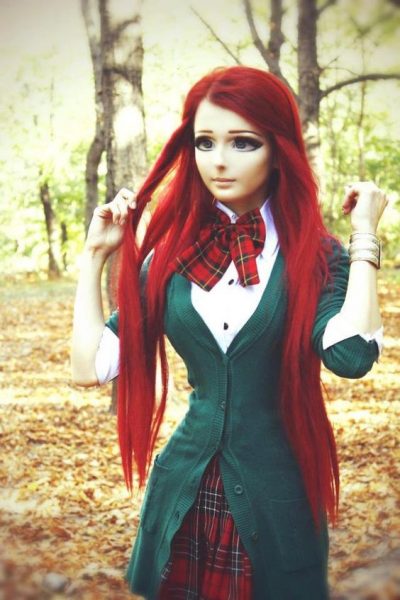 Do you think you’ve already seen it all? I’m here to argue against that! Anastasiya is from Ukraine and now she’s almost 24 years old. As a makeup artist, she acquired reputation through her ability to transform anyone into a ‘virtually’ person, a persona, by using only makeup kits. She is also known on the Internet as ‘ The Master of Animation’, ‘ Real-life Anime Girl’ or ‘Fukkacumi’.

She insists that she has never gone under the knife, but she is considering cosmetic surgery, just for making her eyes look even bigger than they already are. The amazing thing about her is that she is looking like a Barbie only by using makeup! She has many makeup tutorials on her Youtube channel

When people see her, they won’t believe she never had plastic surgeries. But, what do you think? Is it possible to naturally look like this and only use makeup to transform yourself? You can try it at home, but I don’t really bite it! Check this picture below 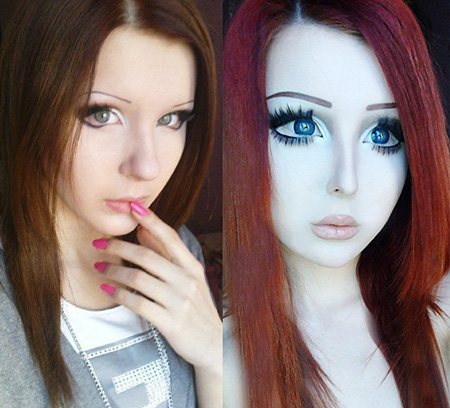 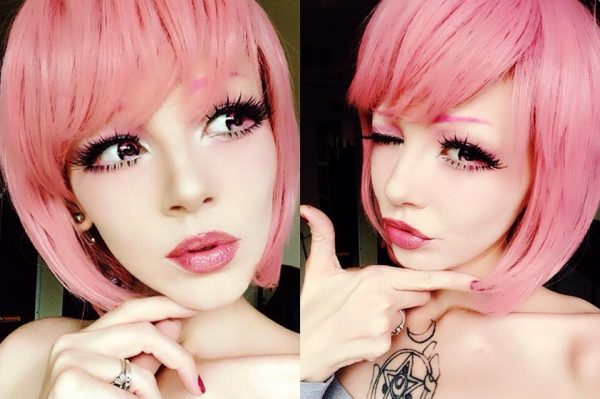 Amber Guzma, also known as Amber Kohaku Chan is a living doll with muscular dystrophy. She is 29 years old and she’s married. Amber said that she made no plastic surgeries and she is really good at makeup (Yeah sure, nice try Amber…)!

Or maybe she is. Who the heck knows. Maybe it’s just me being jealous… 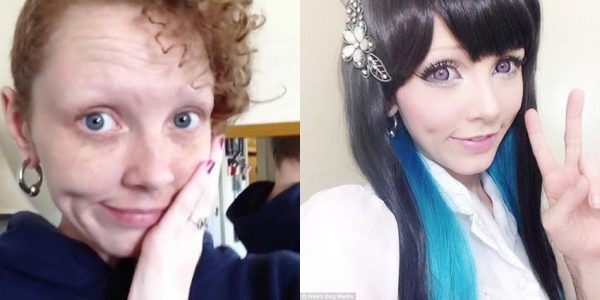 See the makeup tutorial ‘how to look like a living doll‘

Alina Kovalevskaya – the girl who transformed into Disney Barbie 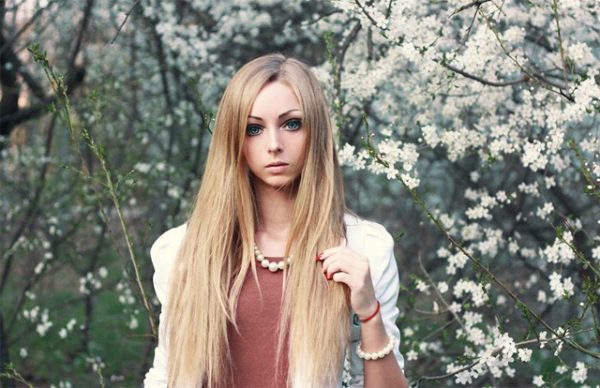 Alina Kovalevskaya is 23 years old and was born in Odessa, Ukraine ( same city as Valeria). She claims to have this Barbie look by doing nothing, except for putting some makeup on (of course). First, she became popular on Youtube, and then all around the world, through social network sites. Alina is studying psychology and social work at Odessa University and dreams of having a husband and two kids (lil Barbie & Ken babies?! 😀 )

Her milky-white complexion, big blue eyes, pointing nose and plump lips are almost unreal and perfect. Indeed, it is pretty perfect, but, is it natural? Here you can see the differences! She looks like a Barbie, but made by Disney! 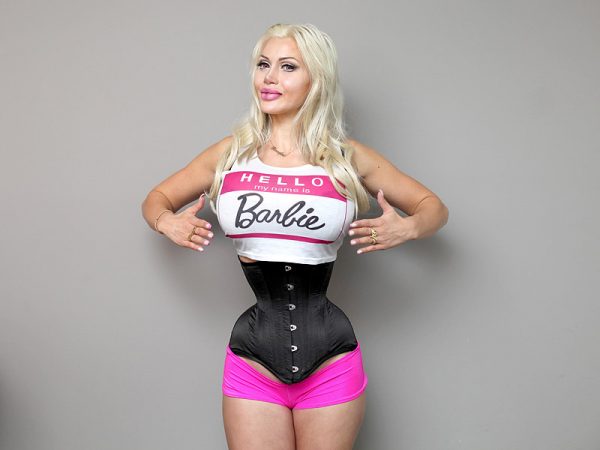 As I previously said, women spend a great amount of money for having a perfect look, but exactly how much can they spend? Pixee Fox here is a Swedish model from North Carolina and she spent over 80,000£ on 19 plastic surgeries at the young age of 26. She also has the smallest waist!

She had permanent implants placed in her eyes to make them ‘cartoon green’, 6 ribs removed, breasts implants and 16 other plastic surgeries. Some girls dream of having a great career, others dream of having the perfect families, but Pixee wants to break the world record for the smallest waist. It sounds like a plan! Below you can see the original Pixee Fox.

Is it just me, or she actually looks older now? Like the mature Barbie with big breasts?

She makes a couple with her real life Ken! 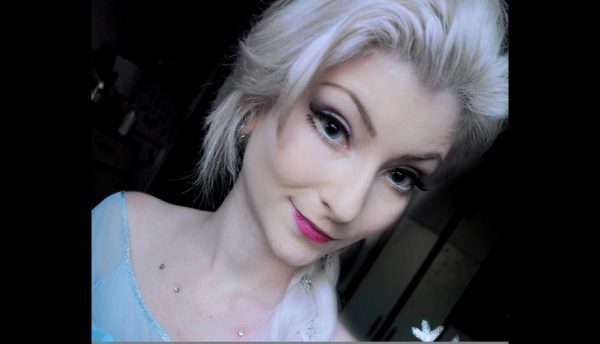 This is 24-years-old Andressa Damiani, a vlogger from Brazil. I guess you already noticed how much she looks like Elsa character from ‘Frozen’. The likeness is astonishing and nobody can say if she just wears makeup on or she had plastic surgeries. I think she really makes children happy every time she takes a walk. 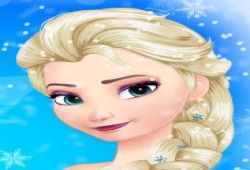 Yeah, she actually looks like Elsa, from Frozen film!

There isn’t much difference between the original Andressa and the living-doll Andressa, but see for yourself! Well…maybe just some differences… but she’s the real life Elsa Frozen! 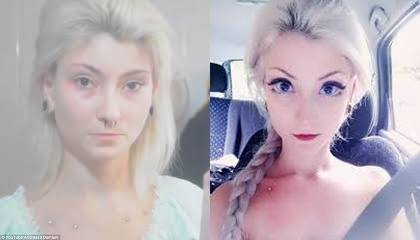 Check out her amazing makeup tutorial to look like Elsa 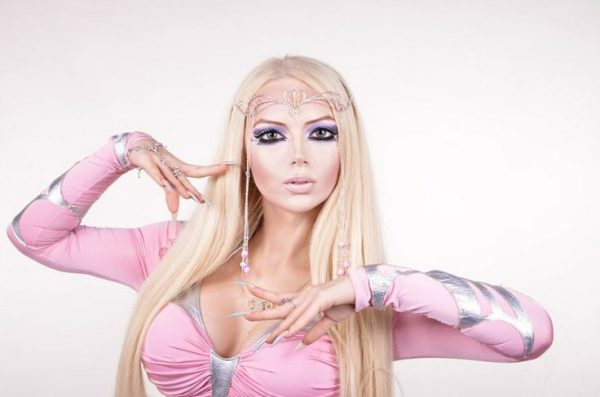 Olga Oleynik has a motto: ‘I am all about perfection and harmony’. Would you say the same about her? I would say PLASTIC perfection.

Olga is known as Dominika, also coming from Ukraine. She is a good friend with Valeria and Anastasiya and she recognized that she did a ‘few’ plastic surgeries to accentuate her Barbie look. If you check the picture below, you will find some remarkable changes at Olga, but not necessarily some good ones! Not so impressive, eh. 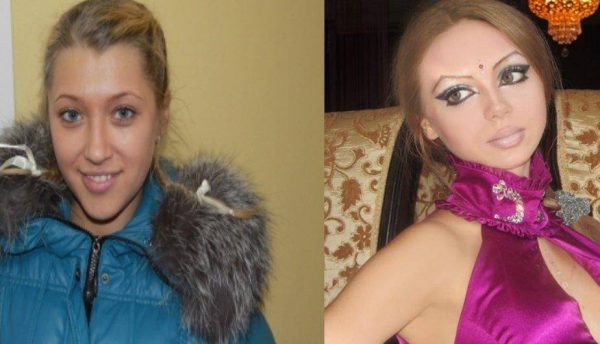 More pics in this video 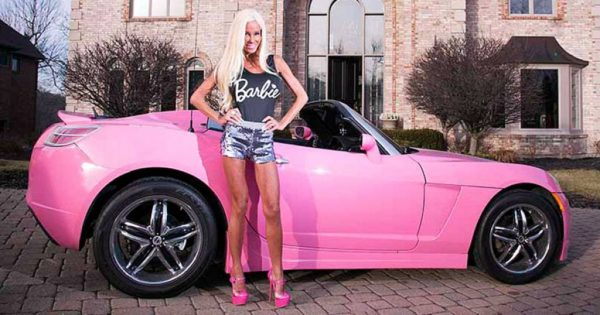 It’s never too late to achieve your life goals! Nannette Hammond is 42 years old decided to be a Barbie, so did she! She’s from Cincinnati, Ohio, mother-of-five and has a lot of money to spent on plastic surgeries. This full-time mother spent over 494,000 $ on three boob jobs, a breast lift, lip fillers, Botox, veneers, semi-permanent make-up, hair dye, nail extensions and daily visits to her at-home tanning salon.

She started this ‘ Barbie’ like transformation when she was only 21 years old and now she almost finished it. She is supported by her family and she feels proud of her’s achievements. Nannette is obsessed with getting more and more tanned ( I think she doesn’t know yet that UV makes you look older), and considers herself PERFECT! Curious about how was she looking like before all those surgeries? Check it out… 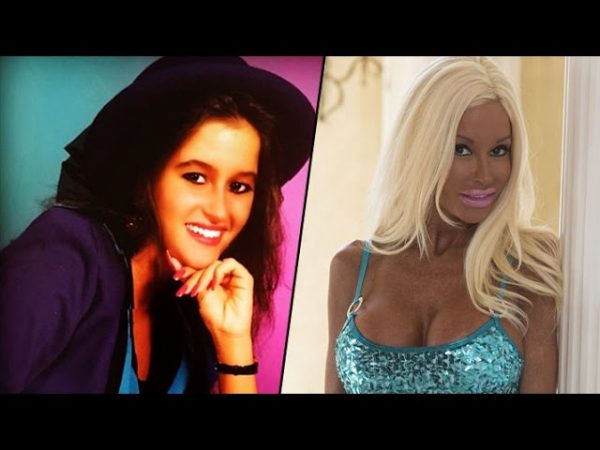 But hey, if you’re crazy enough, and have the money, send us your incredible barbie photo! 😀

If you enjoyed reading this article, please share it with your friends, and let us know your opinion about these women who turned into living-barbie-dolls!

Written with love and coolness by Anamaria Nichita on November 17, 2016 in Amazing Stuff How do you rate this article?