The most awkward things found in the toilet – read about 7 of the weirdest toilet bowl visitors.
Iguana, squirrel, possum, pig, python, shark. It’s the typical image of a zoo. But what would be your reaction if instead of seeing this in a natural reservation you would discover them in your toilet?

1. She thought she clogged the toilet but actually the iguana did! Lilly Lindquist thought she cloogged family’s toilet after using it. After several failed attempts to unclog it, her mom called a plumber. Using her tools, the plumber who was expecting to take out messy things, was shocked when she saw what was coming out:

“To my surprise, I pulled out that large iguana. At first I thought it was a toy, and then it started moving around. I’ve never seen anything like this before.  This is the first time I pulled something like that out of a toilet” said Alisa Scott, a plumber at Roto-Rooter for 12 years.

Watch these videos to see spicy details of the story :

2. It’s the story of Angela Campbell,a woman from Winnipeg who in one ordinary morning heard a noise coming out from her bath. As she was home alone (at least she thought so) , she went to see what is it all about. Her ordinary day suddenly became an exciting one as she found out that the source of the noise was a squirrel trying to get out from the toilet bowl. 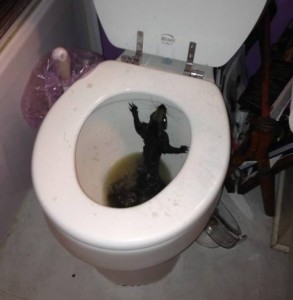 3. Possums usually reside inside trees or logs but this little one wanted to change his home and decided to live in a more “exotic” place, the toilet bowl of a man in Dallas, Texas. 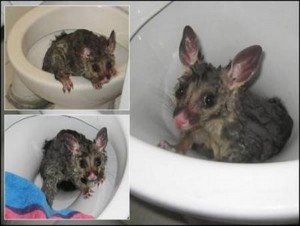 4. When we say “pig” some of us think about food, part of traditional celebrations, others about countryside or zoo. From now on i think the vision will be enlarged as in a rowing club in Amsterdam, ASR NEREUS, people saw the head of a pig floating in the toilet bowl. This is somehow a tradition there, used as a symbol of making a difference between heavyweight and lightweight men. 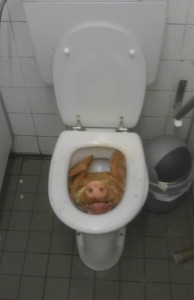 5. Many people have a snake phobia even though some of them have never seen one. I wonder how it’s like to go to the bathroom at Starbucks and come face to face with a snake!! In the toilet bowl!!! What about that snake phobia?!? 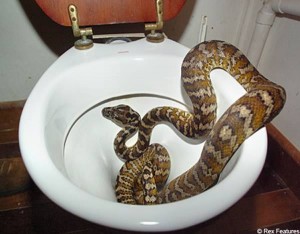 6. Sharks are known for being one of the fastest mammels, reaching a speed of 43 mph, but only in short bursts. May the speed be the cause of this baby shark disorientation?
“No, you little one, this is not the ocean! It’s a toilet bowl!!!” 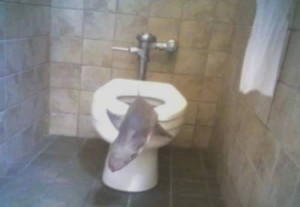 7. What ordinary people do in a toilet?! Well, we all use toilet for biological purpose, but not this man from Claremont, Capetown. People passing by a public toilet called authorities to rescue a man who got stucked in the toilet bowl. So stuck , that only his arms, legs and head were out. It took 40 minutes to take the men out but, as we live in a technological era, he could save his phone in time. 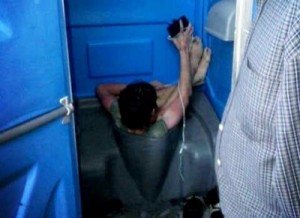 Written with love and coolness by marcu on June 16, 2015 in Weird Stuff How do you rate this article?