See which are the smallest electronic devices and tiniest parts created until now, some of them apparently defying the laws of physics and our beliefs about what is technologically possible for the smallest size.

The armed race for miniaturization in the technology world has started practically since the industry’s inception. This relentless quest for smaller devices such as computers, phones, speakers or their components, like processors and transistors, has led us to the creation of incredible tech feats, some of them which were unthinkable a few decades ago.

Let’s begin with our first chapter, 6 tiniest electronic devices in the world. 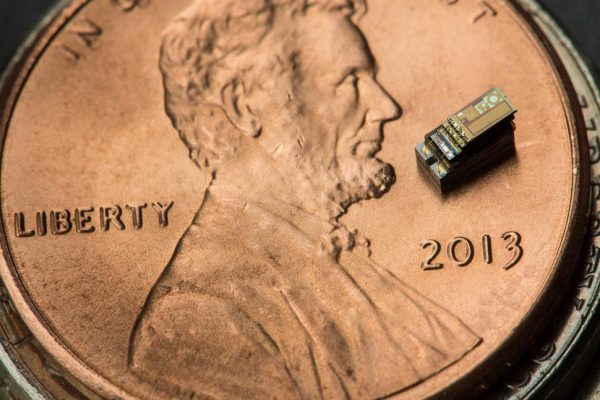 The Micro Mote is the world’s tiniest PC, taking its well-deserved place among the rest of innovative achievements in the domain of automatic processing. Measuring less than ¼ inches, the computer did not require a car to transport it from the headquarters of the producer (maybe just a toy one, just for the fun. What? it is fun!). Actually, more than 100 of miniature PCs could fit in just one thimble.

The system is a completely independent processing program that functions as a smart detecting device. It represents the accomplishment of Michigan’s IT experts over many years, with some of them having already established companies to improve key factors of today’s technology. These gadgets are assisting people in the upcoming era of ‘Internet of Things’ or IoT, where everyone is linked to devices and other individuals via the cloud system.

In this vast IoT ecosystem, small dimensions and low energy are everything. All computer systems must be tiny to be able to scan the entire space around people, without being invasive, and the devices have to work on incredibly low energy to coordinate their actions. 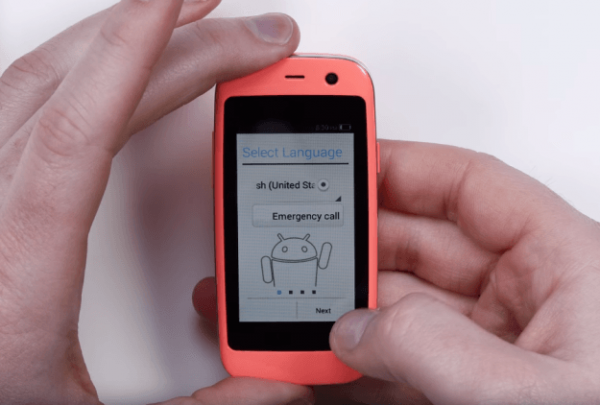 The Micro X S240 from Posh Mobile represents the market’s tiniest smartphone. It is also the world’s smallest Android phone!

This 2.4” device with touch LCD screen is placed in carefully curved covering, which is no bigger than your regular bank card. The original smartphone offers excellent pocket-sized capabilities powered by a modern processor able to hand even the most demanding tasks. If this would be on a discount for Black Friday, I bet they would fight for it!

Micro X S240 has three bands of LTE connections for maximum communication and improved coverage while offering up to one week of standby time and six hours of continuous talk-time. Its 2MP main digital cam takes good pictures and videos, while the VGA frontal shooter provides complete functionalities for video chatting. The smartphone is produced in a series of colors such as black, white, blue and red, allowing to micro-size our cellular life today. Such a tiny smartphone is the only one small enough for the smallest girl in the world. 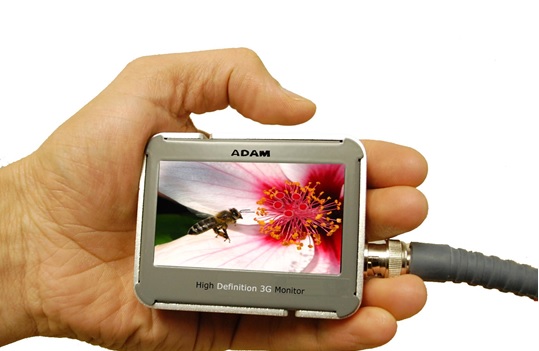 The UK-based company High Performance Technology has released Adam-HD, its standard rechargeable and pocket-sized monitor. This 2.8 inches screen was created for manufacturing use, being also handy for system technicians and the tracking of shows, or events. It could be utilized at official launches or other presentation shows, allowing people to check alerts and slides as they go by (and other stuff that might be a bit more nasty…).

The device has an auto sensing SDI feedback for video with a quality of up to FullHD, an indicator for its display, two separate channels for audio streaming, an earphone outlet and a battery or charge LEDs. The monitor has variable degrees of brightness, ISO and chroma, enabling users to optimize the image for all categories of videos, outdoors or in the house. The device can be powered up via a USB plug (pretty convenient).

Smallest Keyboard with Touch Pad Integrated Into It – Adafruit Ind. 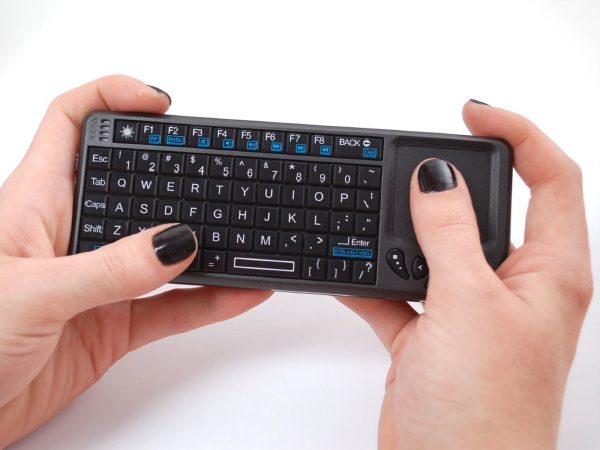 This miniature keyboard is wireless and is a successful combination of keys and touchpad in the palm of your hand. This is the tiniest USB keyboard sold on the market, barely measuring 6 inches in length and 2.5 in width. It is small, but good enough to become a great peripheral for a micro PC, like the famous Raspberry Pi.

The keyboard is powered by a pack of batteries since there is a rechargeable slot inside where you can power up the batteries with the added USB wire. The miniaturized device is linked to the central unit via a 2.4GHz connection, and not via Bluetooth transmission. Maybe it could be useful for the smallest drone? 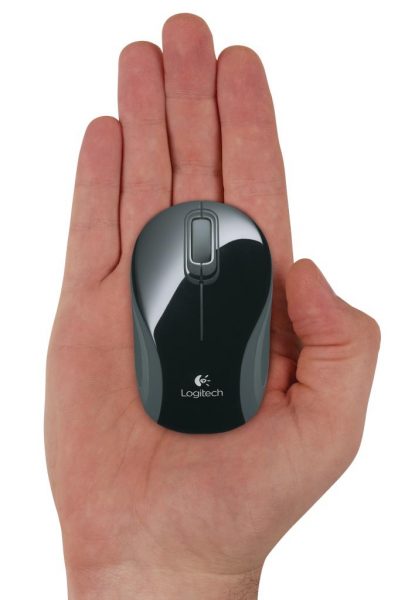 Logitech is not a company known to let information, or functionality, get in their way when it comes to a cool product sale, and it has remained true to their belief with its newest mouse. The designers made a strongly claim that this is probably the tiniest wireless mouse up to know.

Apart from this interesting claim to boost their popularity, the mouse seems to be a fairly conventional optical peripheral. It will be an ideal companion to your mobile duties by providing a switchable resolution of 400, 800 and 1600 dpi, a guaranteed time of 72 hours of ongoing use with a single charge, all completed by its cover range of approximately 25 feet. If these features appear to be good enough for your daily tasks, you can use the mouse as a portable device wherever you may go. 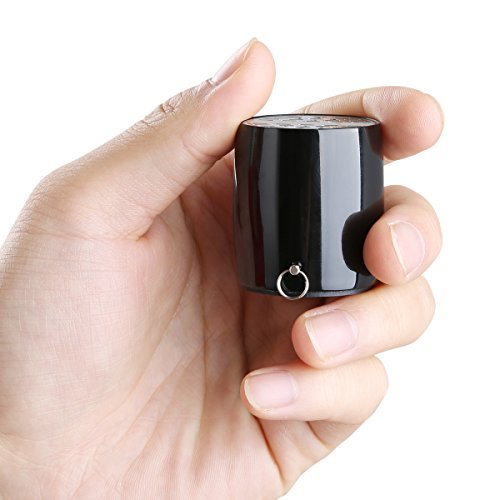 If you are still searching for an extremely small and convenient Bluetooth speaker that vanishes inside your closed hand, then you might have found the best choice. The QinDrum wireless speaker is, at the moment, the smallest in its class, but it could be dethroned in a short time by even tinier devices.

So far, it is the most compact, light, and the smallest Bluetooth speaker that we have ever noticed, being produced in several colors. It can easily fit in your trousers’ pocket or it might even become a tiny pendant for your car or house’s keys. While the speaker is small, it still provides a quality audio experience and can make hands-free calls via its built-in mic, thanks to an outstanding range of 30 feet.

The standard rechargeable battery pack offers up to 5 hours of song playback, also having an integrated selfie shutter only for Apple’s iPhone models and iPad tablets (how cool is that?), but it does not include support for the iPod (boo).

OK, enough with the electronic devices. Let’s have a look on the tiniest parts now. You will truly be amazed by how small they really are now.

Smallest Transistor created at the University of California 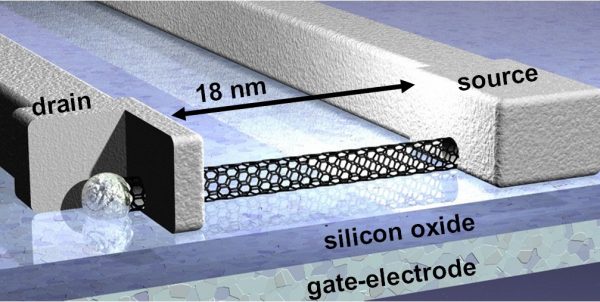 Researchers from the University of California have attempted an unimaginable thing in science until a few years ago, by reducing the dimensions of electronic devices even more with the creation of the smallest transistor up to now. Today’s small transistors in high-end semiconductors found on the tech marketplace have sizes between 20 and 22 nanometers.

Electronic parts keep getting more and more compact by the year and we are expected to have 10-nm transistor elements in customer items in the next months, with even smaller dimensions possible in after 2020. In comparison to that microscopic diameter, a human hair has a “whooping” size of 50,000 nm! Yep, these transistors are way tinier than you imagined! The largely accepted rules of science estimate that if we reduce the size of transistors below 5 nanometers, electrons streaming along their conductors can move across them, making it difficult to control electrical currents, this being called quantum tunneling. Scientists assumed that 5 nm transistors will represent an immediate solution to many technological obstacles and may even challenge the old Moore’s Law.

This concept states that the amount of transistors inside a heavy integrated circuit is doubled roughly every couple of years. This period is the normal technological cycle for many generations of products. The researchers from UC took the decision to use different materials than the famous silicon composites, which are the standard fabric for electronic devices, meaning molybdenum disulfide or MoS2 and nanotubes.

Materials Used in the Development of Miniature Electronic Components 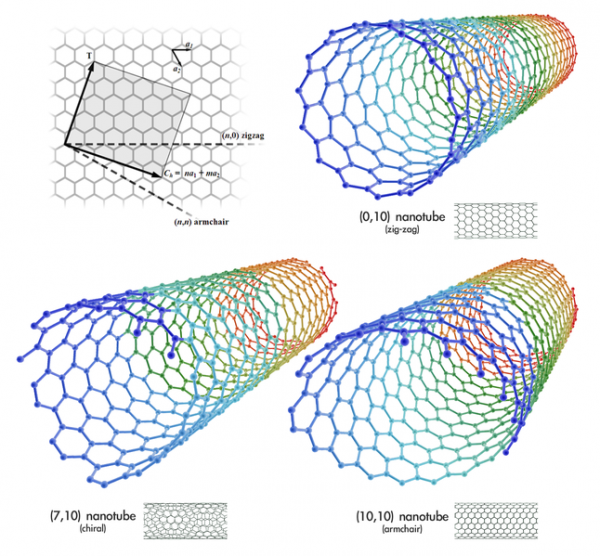 MoS2 represents an engine lubrication substance found in vehicle repair centers and is part of components that have conductivity resistance properties. This material is a great candidate for utilization in laser treatment, solar panels or LEDs. Many semiconductor producers have long believed that any component under 5 nm would not properly perform.

As a consequence of that, all parts below this size were not even taken into consideration, according to the lead specialists of this study. This analysis has shown that the gates under 5 nm must not be ignored. The market has been extracting every bit of potential from the silicon’s characteristics. 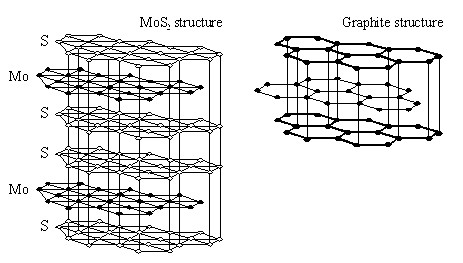 By modifying the substrate to MoS2, experts were able to create a transistor that has a gate of only 1 nanometer and that can function as a switch. MoS2 and silicone have a crystalline lattice structure, but the phenomenon of quantum tunneling happens more inside silicon particles, as its electrons experience a lower level of resistance than that found in MoS2.

Because it is hard to make traditional lithography methods to perform at only 1 nm, the researchers had to utilize nanotubes to be able to manage the circulation of these electrons. By proceeding this way, they made the tiniest transistor up to now, and the gate is regarded as a sizing factor of all transistors. 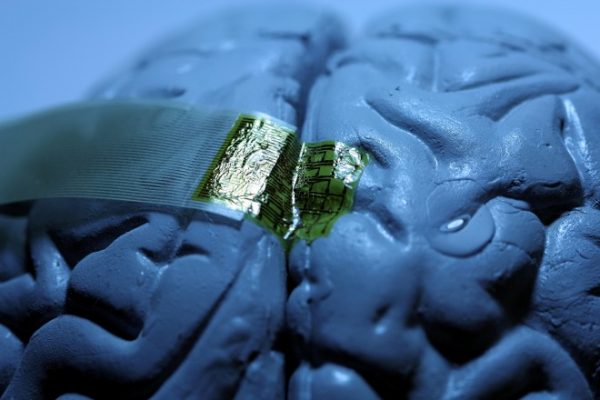 I guess we are not too far away from the moment when miniaturized technology will merge with the organic tissues in our body, allowing us to control remote devices with just a simple thought. That is an amazing thought that feels good. So good that it makes my brain hot (see world’s thinnest thermometer) . And lazy, for the matter.

The future sounds good! So live more, get to see all the amazing electronic improvements it will bring!

Written with love and coolness by Gabriel on November 16, 2016 in World's Smallest Things How do you rate this article?