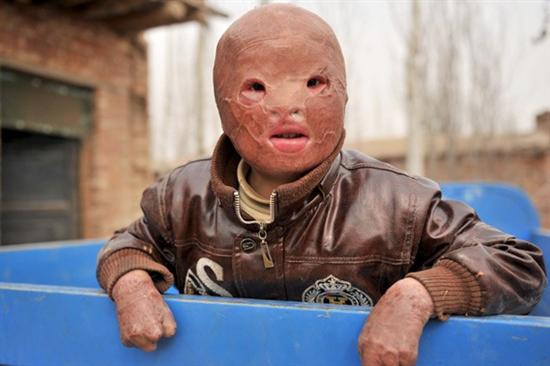 Let’s have a look at the stories of some amazing cases, surviving victims of fires. Surviving a fire is hard, but looking like a monster from the burns and living with them for the rest of your life is really worse. Let’s check out together, the stories of some of the most impressive cases of people, who amazingly survived fires, and who shouldn’t be alive right now, if some sort of miracle hadn’t kept them alive. Yes… the nickname he now has is terrible, but his story is even worse. Xiang Xiang was dubbed the “Chinese Mask Baby” after having suffered extensive burns to his face, but not only. Xiang lost his right eyesight, four fingers, but what is far worse than that is the fact that after the fire, all of his friends and family consider him a freak. Seven-year-old Xiang Xiang is now obliged to permanently wear a surgical mask after being horrifically burned in a wood fire back in 2012. Unfortunately, he is now extremely sensitive to sunlight, but he declares that he feels like any normal child his age, and acts accordingly. The little boy underwent intense treatment for 2 years, and now, his face is featureless: has no hair, lips or eyelids after his face was burnt off after he accidentally set himself on fire as he was setting fire to a pile of corn straw with a cigarette lighter. Due to the costs of his treatment, his parents had to sell their home, and are now living on a patch of land. But luckily, the boy returned to school and is now playing with his new classmates, who have gotten accustomed to his gruesome appearance, but big heart. See more pictures of the Chinese “Mask Baby” below: Meet Terri Calvesbert… a girl who by all odds, should not be alive today, but with the aid of some extraordinary doctors and with a real life miracle, shes alive and well after surviving a deadly house fire who left her with burns on more than 90% of her body.

Terri suffered the burns out of her mom’s fault, who was careless enough to leave a lit cigarette in her baby girl’s room, when she was only 22 months old. Read more about this story on the next page.

1 2
Written with love and coolness by Marius on June 20, 2012 in Amazing Stuff How do you rate this article?