13+ cases of Cars Falling Into Massive Sinkholes, cars driving into big instant road holes, and instant traffic collapsing sinkholes, falling into the ground! Collapsing road holes all around the world.

I think we all heard about cases when cars fell into road holes. Usually called a „portal to hell”( I would say, a portal to bad luck ), a road hole can be very dangerous when it occurs, and you have to be very lucky and a quick-thinking person to get out of your car… (I wonder how many can brag about that…)

Even though, in many cases, people were not actually in the car… so lucky, you guys!  You can actually drive into all kind of instant road holes (like you’re driving peacefully in your expensive car, with a lot of zen and stuff like that, while listening to your favorite song, and all of a sudden…boom! the road collapses and you’re down in a hole!), potholes, sinkholes, big, small, large, deep, large and deep..(if you have a really bad day…) 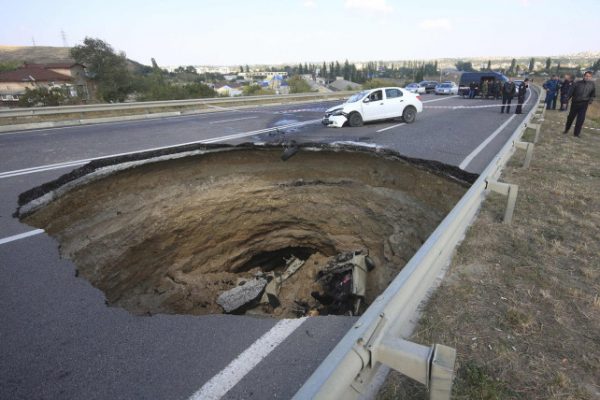 Imagine how it will be, to wake up in the morning in a bad mood, you have no coffee left, the house is a mess, but  still…you gotta go to work… ! You get in your car, turn the radio on and the main subject is the heavy traffic… two more streets down, you see yourself in front of a huge road hole, and you have no time to react…so you are plunging into it  ! Wow, that is what I call „Damn, this is a bad day” ! ( But it’s never too late to quit your job and stay at home! right…?)

I found some cases of this kind of bad days, and I am sure that you will be quite amazed and a bit terrified too. Here you will find a list with cars falling in giant holes from all around the world.. so check it out and …don’t forget, drive carefully! 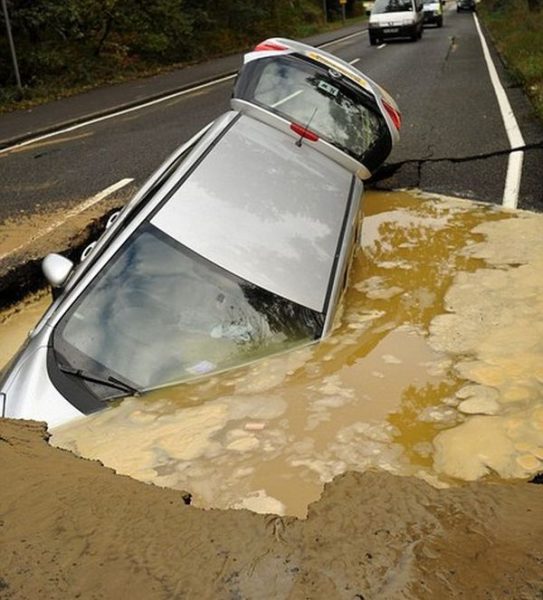 The driver of this car is a lady, who had a really bad, bad day. As she made her way to her office on highway A320,6 October 2011,  she had the bad luck to meet a giant sinkhole. Luckily, she didn’t have the fastest car, so she was able to clamber out of the pothole,  but as you can see in the picture, the opened ground swallowed her car and covered it with thousand gallons of water. After the police came and the car was pulled out, the road was closed for a few hours and then for a few days, in order to get that substantial hole fixed. Next time, I think she will take the bus! (wait… don’t feel safe yet… read on)

2. Giant hole on a Brazilian road 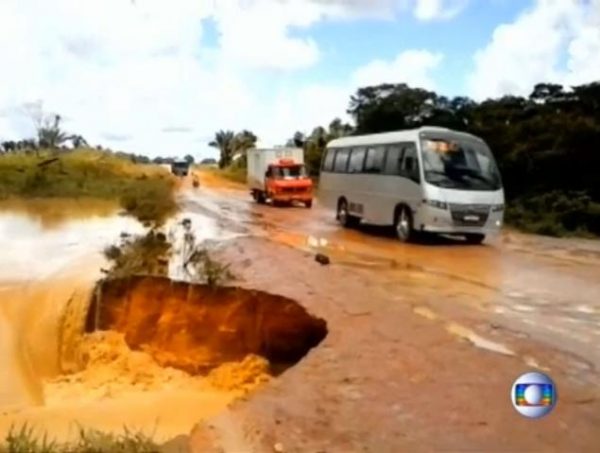 On 25 March 2015, somewhere in Brazil, this bus was filled with the unluckiest men in the world! As you see in the first photo, the river eroded the road and after a few meters, this is what happened…. 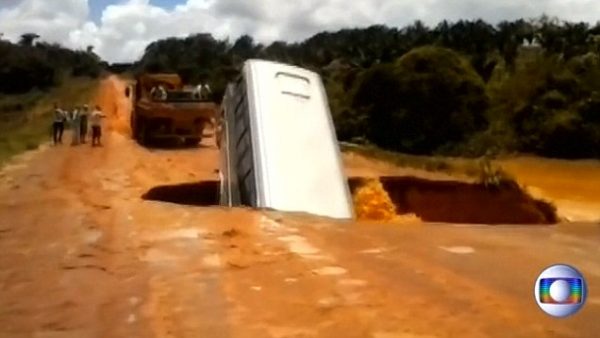 As you can see, the bus fell into a massive crater … but as this wasn’t already bad enough, after being swallowed, it was washed away by intense floodwater…! 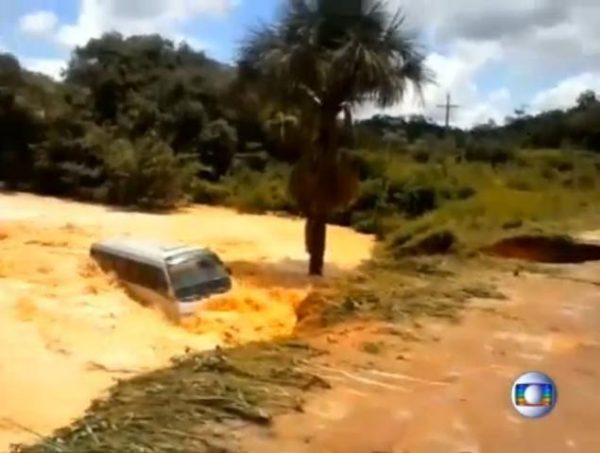 Luckily, everybody got out of the bus in time and none of the passengers were injured.

This time, an unlucky family couldn’t get out of the car in time… This large crossroads hole put in danger three people and destroyed their car by drew it into the chasm, on 6 February 2016. The passengers were pulled to safety by passers-by. 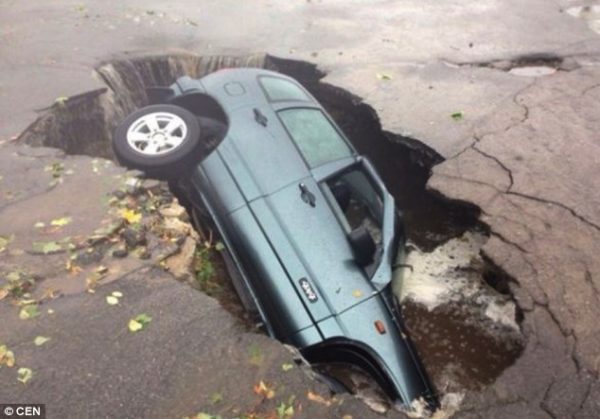 On 1 October 2014, this guy was driving back home when the road collapsed underneath him. Although the ground vanished below pretty fast, the man managed to get out of the car and climb out from this flooded pit. Ugh, bye-bye car! On 23 May 2016, the owner of this car checked in at a hotel in Barnaul. In the morning, she saw her car submerge into a giant pothole in the street (good thing this car is not fueled with air)… After she called the emergency services, she waited for hours for her car to be pulled out. It took 15 people to lift the car out of the one-meter-deep hole. 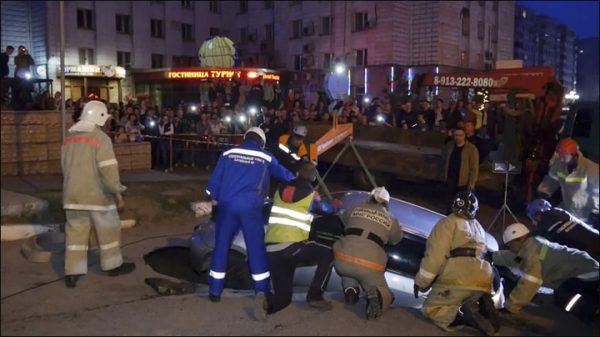 At least they got it out! I guess she hates hotel’s parking lawns now. 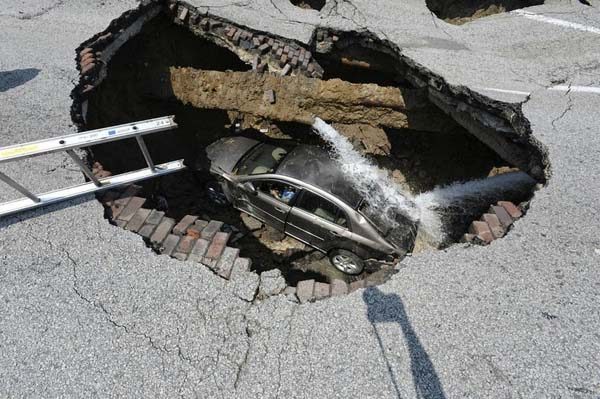 On 4 July 2013, an old woman was driving this car by the time the ground collapsed underneath her. She wasn’t hurt, but she was taken to the hospital to be checked…This huge sinkhole was caused by a broken water pipe. Thank God nobody got hurt! 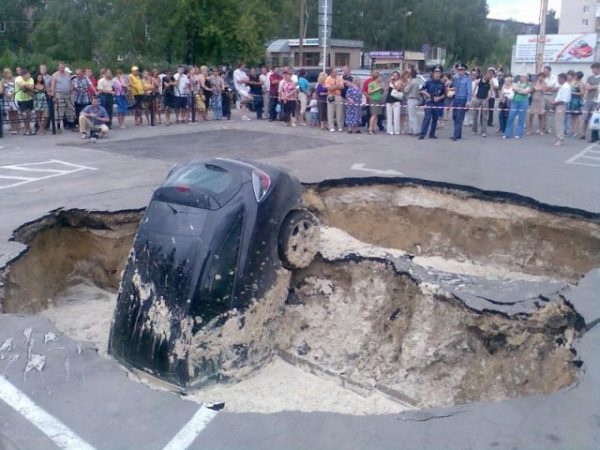 Imagine how you would feel to wake up and see your car like this? Well, on 10 October 2009, the owner really felt some chills down on his spine when he woke up . Can you see how many people gathered there? Maybe the floating car would help…? 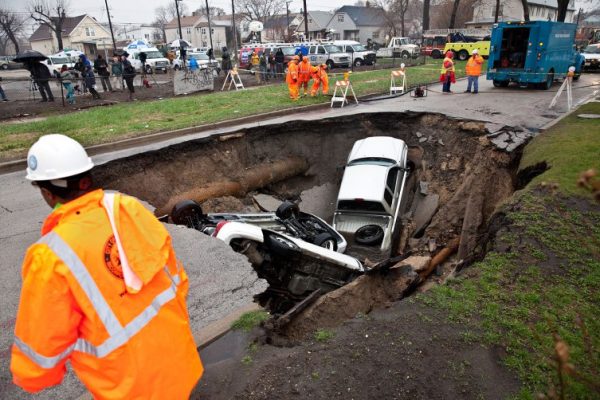 The cars were parked, so no one got hurt ! As one of those cars owners, you should see the good part…. You are not the only one! But, the bad part is that the entire neighborhood was frighted by the fact that the cars fell over an exposed  24-inch gas line.

8 Nov 2015. Wow! This 600ft long sinkhole is terrifying… look how it swallows all the 15 cars! The owners just stood and watched how their cars are being destroyed… it must be a terrible feeling… ! Now would be pretty cool and useful to have a flying car 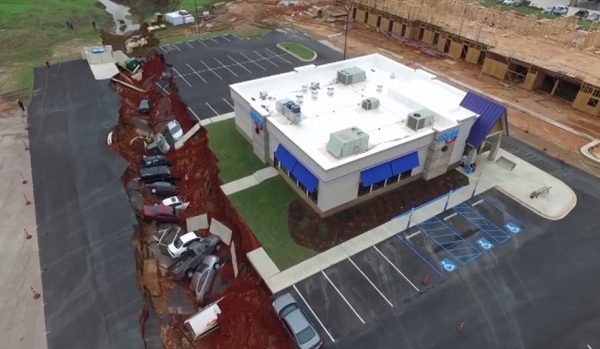 China is taking the lead in the media with sinkholes, road holes and potholes swallowing cars. On 16 May 2013,  a family with three children got really scared when their car was sinking out of nowhere into the ground. They managed to get out and escape death, even if the doors were blocked – and well, they were. But, in the next 15 minutes, the car disappeared under the ground…. 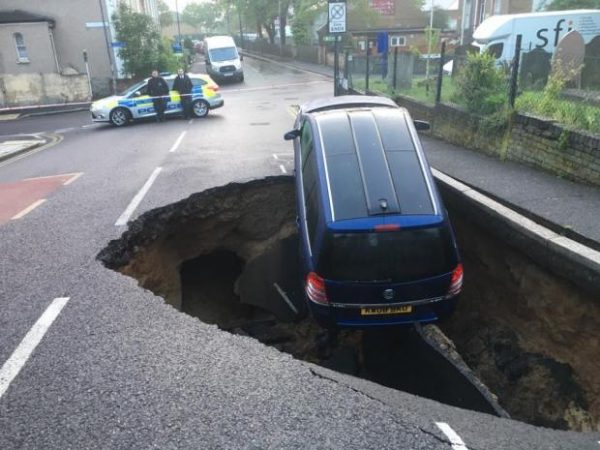 On 12 May 2016, in Charlton, UK this car felt in a hole which formed after a heavy rain. Nobody got hurt, but the owner had a bad morning… 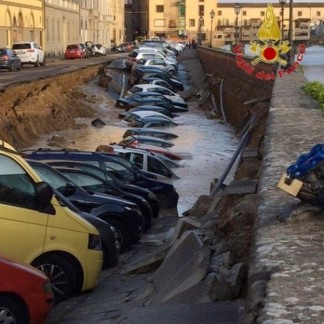 On 25 May 2016, in Florence, Italy, 20 cars fell into a huge chasm that has been created by the failure of a large water pipe beneath the surface. Luckily, no one was in the car or nearby. Ugh, what a disaster… 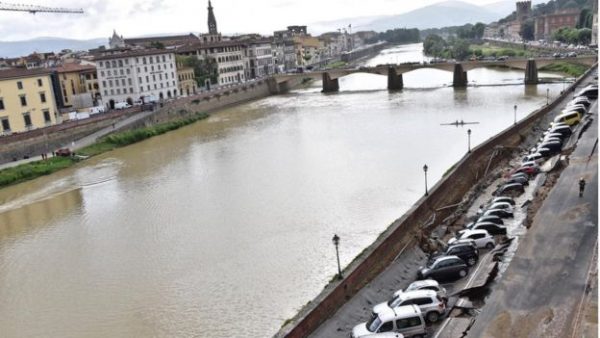 Read on for more cases, on page 2.

1 2
Written with love and coolness by Anamaria Nichita on October 31, 2016 in Amazing Stuff How do you rate this article?