Let’s have a look at the world’s biggest snake caught in Malaysia and other extremely huge snakes from all over the world. Boas, anacondas and pythons… all extremely dangerous and more importantly, very, very BIG! Apart from this 55 feet long giant snake found in Malaysia, we’ll talk about some of the largest snakes in the world, so have a look.

The most shocking picture of a huge snake has gotten everyone trembling with both fear and amazement. Fortunately, at the time this picture was taken, the giant beast was already dead… but, unfortunately, the people who took the picture testified that apart from this humongous snake, there was also another one, larger in size, which managed to get away.

How did they come across the world’s biggest snake?

Well, while tearing down the forest to make room for a new high-way, the construction workers accidentally injured the huge snake. When they got off the CAT to see what they had hit, they were petrified to see the largest snakes ever. They snakes managed to crawl away, but just a few feet upfront, the workers found the injured snake dead, and the other gone. The beast was a 55 feet long boa (16.7 meters), it weighed 300 kilograms and its age was estimated to 140 years. The bulldozer operator who accidentally killed the snake woke the beasts up when he was trying to break a mound of earth. Unfortunately, reports say that the worker was so scared and shocked of the blood and the huge snake that he had a heart attack on the way to the hospital, and passed away later that day.

This discovery just goes to show us that nature always finds something new to surprise us with, and that different movies like “Anaconda”, may not be that far off from the truth. This monster makes the computer generated snakes in the movie seem like little babies…

You can also check the latest biggest snakes, for 2016

Titanoboa The Largest Snake EVER Surprisingly or not… the largest snake to ever roam the earth is a species suggestively titled the Titanoboa. This huge critter wasn’t as long as the previous case, but it was much, much bigger. It was 48 feet long, and weighed an estimated one-and-a-half tons! No, there’s no error in that weight… Luckily for us, this species of monster snakes roamed the earth sixty million years ago, in the mysterious era after the extinction of the dinosaurs. Scientists believe that this colossal species of snakes once ruled the world and thanks to some awesome archaeological unearthing at an open-pit coal mines at Cerrejon in La Guajira, Colombia, a full skeleton of such a large constrictor was found and scientists could once again bring it back to life at the Smithsonian.

Watch a few videos of the huge Titanboa snake below:

And below is a behind the scenes video of how the huge snake was brought back to life: Now, did you think these two snakes are huge and scary? Well, what if we were to tell you that their size pales in comparison to a snapshot of a 100 feet long snake which was spotted in the Baleh river, Borneo. This areal photo shows a gigantic snake swimming in the river and since it surfaced, it caused a lot of panic and fear amongst the locals. Whether you believe the photo to be real or not is entirely up to you… but if it is indeed true, we might be in for a huge surprise any day now. 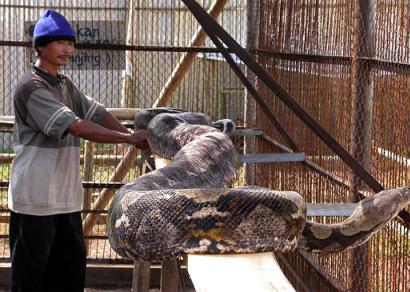 Were you thinking of taking a trip to Indonesia any time soon? Well, maybe you should ponder on that idea some more… Locals captured a 49 foot giant snake which weighed 990 pounds. The humongous reptile is officially the longest snake ever kept in captivity (more specifically at the zoo in Curugsewu village on the Indonesia’s main island of Java)

Local government officials declared that the python measured 48 feet 8 inches and weighed in at 983 pounds. Unfortunately, the snake was subsequently proven to be less than 23 feet (7.0 m) long. So far, The Guinness Book of World Records confirms that the longest snake ever captured is just 32 feet long, while the heaviest snake kept in captivity is a Burmese Python from Gurnee, Ill, and it weighs 402 pounds.

Below you can see a video of the 49 foot Reticulated Python in Indonesia. 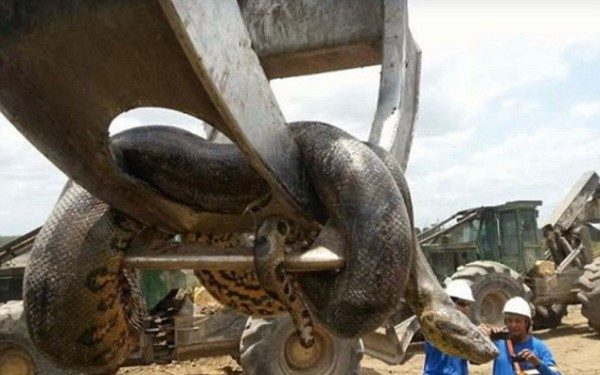 This snake might be long, but check out the most venomous snake in the world.

Thanks to user justmk for the help.

Written with love and coolness by Marius on December 7, 2012 in Amazing Stuff How do you rate this article?