The amazing Men who won the record of being covered of incredible amounts of tiny stingy bees – read about 5 courageous men who were completely covered with bees.

Let’s read about the newest story of a man covered with most bees ever.

1. The man who broke the world record for most bees covering a man

Gao Bingguo is a very brave man from China who dared to do what few people would do. Most of us are afraid of only one bee, but Gao dared to be covered with 326,000 bees.

The man is 54 years old and lives in Shandong Province. He says he worked and raised bees for over 34 years, and he is not afraid of these little powerful workers. 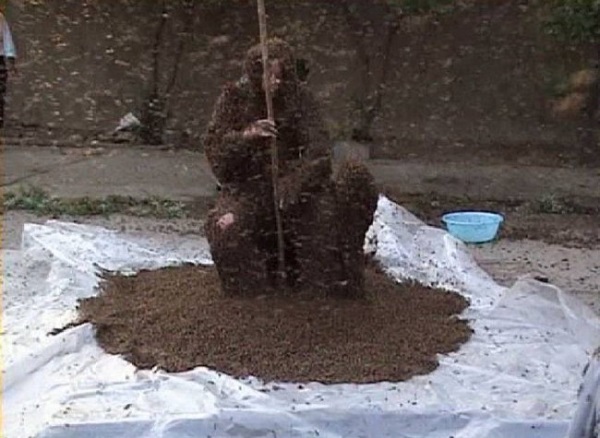 In order to completely cover the man, the staff need to attract all the bees together. This task was accomplished by attaching all over the body boxes containing the queen bees.

The bees were then released at his feet, and they gradually started to cover the man. 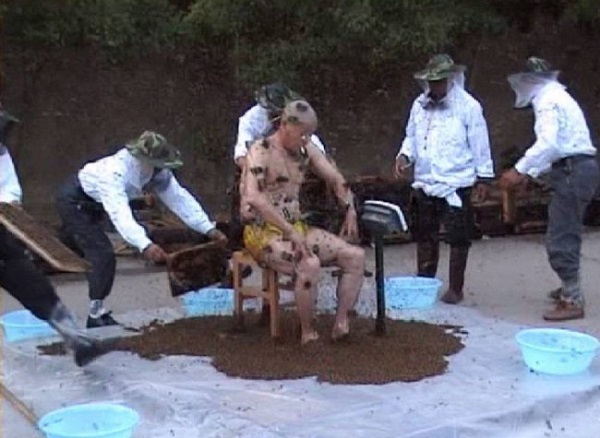 It took 2 hours and a half until the man was completely covered with bees. The bees armor weighed about 33 kg, and it stung the man for about 2000 times. Or so he claims. 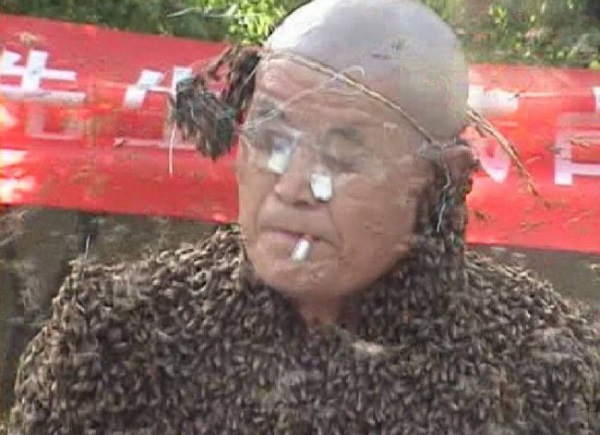 After he had broken the world record, the man did a well-deserved bath in special ointment to soothe the pain from the stings.

Below you can watch the video of the brave man covered in most bees in the world:

The previous man who dared to achieve this title is also from China, and his name is Ruan Liangming.

He spent the longest time ever covered with bees, about 57 minutes and 34 seconds. 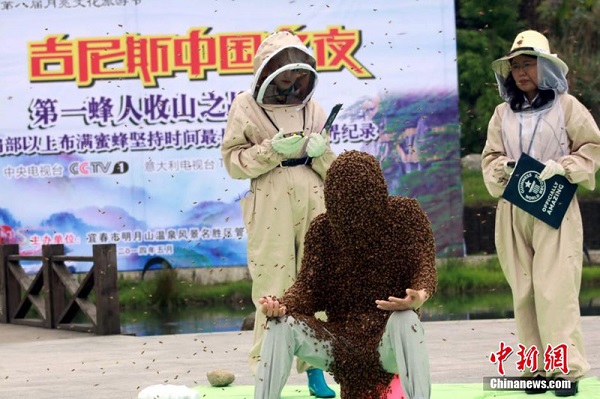 This amazing event happened in May, this year. The man was sitting on a stool, covered with a layer of honey and having a queen bee attached.

He has no protection for mouth, ears and nose, but he managed. The bees altogether weighted about 61 kg. 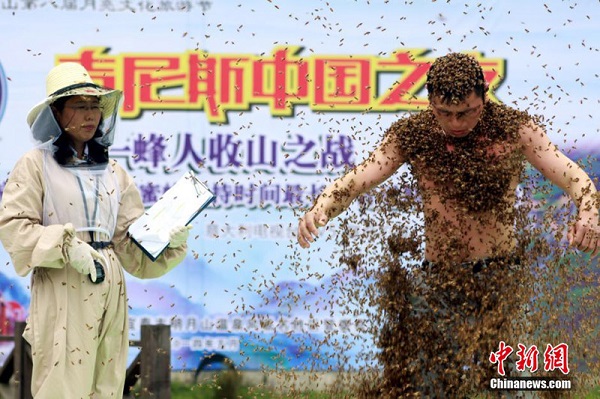 Below you can watch the amazing video of the man covered with bees:

3. Man covered with most bees for publicity

In order to sell more of his honey, a man from China, Chongqing, covered himself with 460000 bees. The amazing event was only for selling more of the honey he is producing.

The bees suit weighted about 60 kg, and the man said he was stung about 20 times in the 40 minutes. 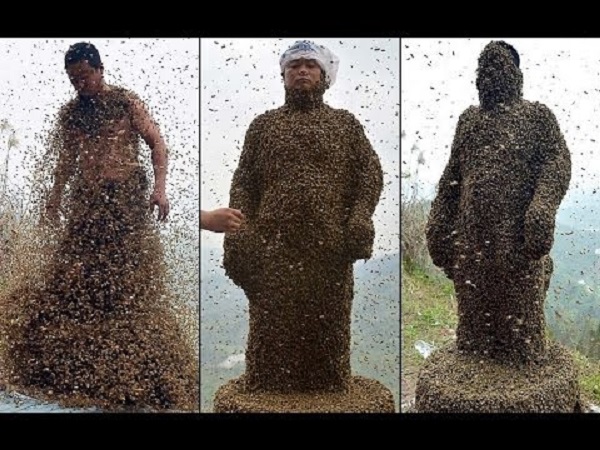 The man was covered completely by the bees, and he looked like a bee statue. Chine is one of the main producers of honey in the world.

Below you can watch the video of this man who was courageous enough to promote in an unique way his business:

Two man from Yunan, China, embarked in a competition to see who is most attractive to bees. The one who would attract most bees would win the fight. 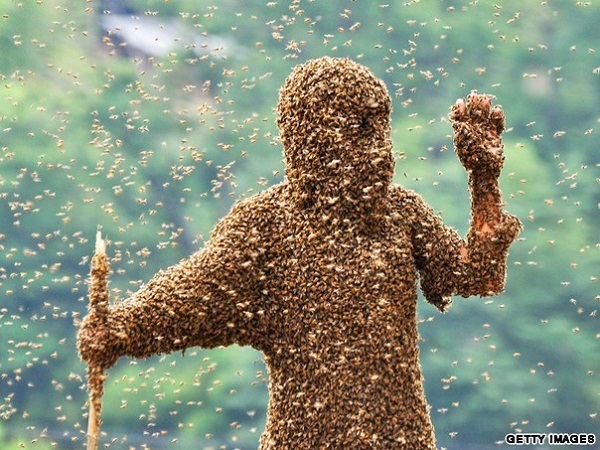 The two man had a queen bee attached and sat on a scale to measure the quantity of bees. Lu Kongjiang and Wang Dalin are beekeepers, and this is not just a job for them, but also a passion.

Wang Dalin managed to attract the most bees in an hour, and his bee suit weighted about 26.9. 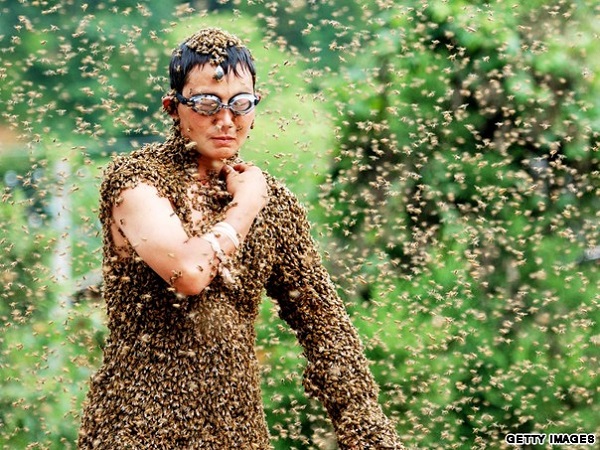 In Ontario, there has been an incredible annual competition that includes lots of bees. Braves teams had to wear a beard made of bees. The team with the longest “beard” won the competition. 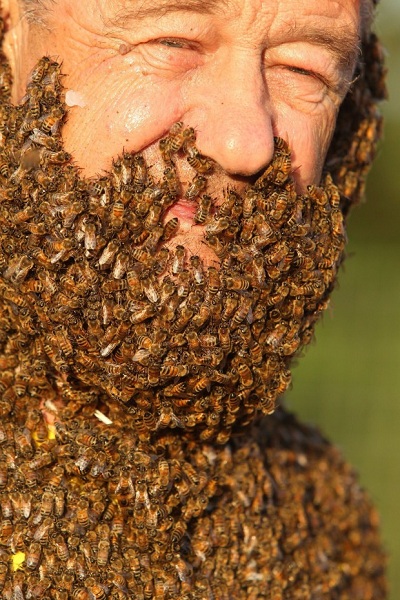 This competition started in 1700 when the people who were growing bees attached a queen bee to their necks and noticed all other bees would follow her and sit on the one who would wear her.

After this, the man would walk in the town so everyone can admire him. 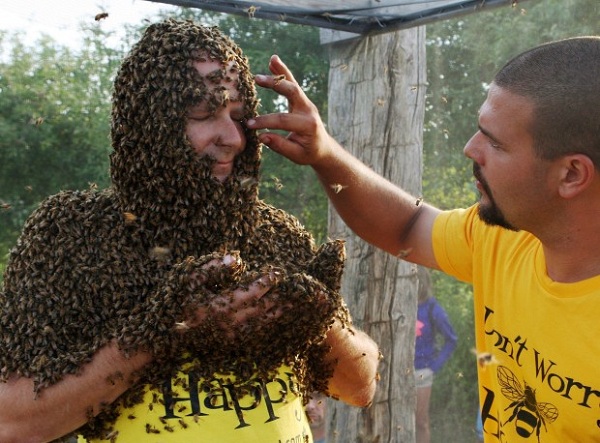 Written with love and coolness by karrinah on July 1, 2014 in Amazing Stuff How do you rate this article?