To inspire you also, we’ve put together a list with 7 of the most weird, incredible or interesting ways of creating pleasant sounds. You like music, don’t you? So do we! So whenever we’re shuffling through poor playlists, music making comes to mind.

To create their music, “composers” use either common, near-by objects or any other manufactured tool you can… or can’t even think of. It was a really late night for their music.

This is what they came up with:

1. Birds On The Wires

Our first songwriter had only needed five electrical wires and some non-strategically placed birds to come up with his pretty cool tune. Jarbas Agnelli declares to have woken up one day, have taken a picture from his window and ta-daaam, inspiration stroke!

It’s like they are doing an instant flash mob 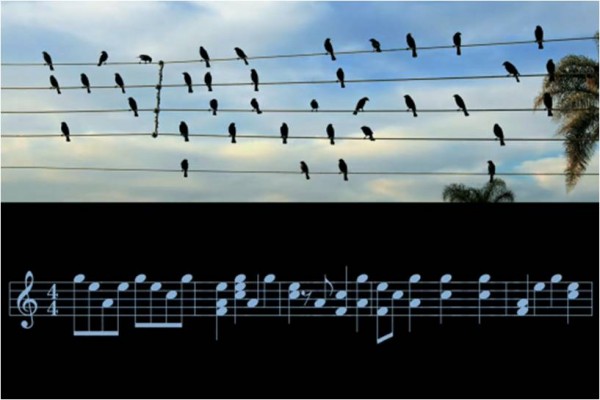 Due to the birds’ location, he imagined the ensemble to be notes on a music sheet and started assigning sounds to dots, connecting them into an interesting, nice song. Below, you can listen to the result of his work.

Now, this crazy idea has been featured on the Ellen DeGeneres TV Show. Cool, right?

Seems that Kathy Doutt had discovered this new and unique music making method with her son’s help. By dropping cat food cans on the floor, he heard musical notes. So, Kathy thought of putting them together into a tune. Although she declares to have no musical inclination, we beg to differ and, as proof, direct you to the movie below.

For more interpretations check out her entire YouTube channel.

3. Salt on a metal plate

Nikola Tesla said that in order to understand the Universe’s secrets, you need to “think in terms of  energy, frequency and vibrations”. This is exactly what Meara O’Reilly, an amazing composer, is doing within the pale of her project.

Chladni Singing is her way of expressing. On the break of the 19th century, physicist Ernst Chladni (the one who, obviously names this method) found a way to show vibration modes on metal surfaces. Here’s a sound wave out of salt pattern! 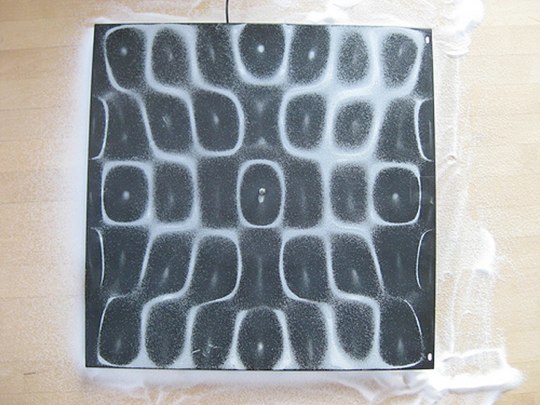 Giving form to sound waves with a microphone and a transducer driving a metal plate, Meara puts sounds together into a symphony based on the scattered salt patterns. In the movie below, witness yourself the greatness of this process.

Easily said, Air-Ergy is the music of your body. With the help of  interactive devices spread on the human body strategically, the music of human body is reproduced by demonstrating kinetic energy. It’s an awesome virtual world that reflects the real one. Watch the movie below for an amazing feel of this intense experience.

As it can be observed:

We find this whole experiment extremely impressive and interesting, due to being a communication process between the real and the virtual. Real sends data into the virtual (by body movement). The latter responds in audio and visual interpretations. WOW!

These boxes are, in fact, 20 speakers powered by solar panels and enabled by amplifiers and sound modules. They make up this amazing sound installation that experiments with sound and solar energy. The picture below illustrates Craig Coloruso’s Sun Boxes for the 2009 Off The Grid exhibition.

The cubes are set to play as long as there’s power, so, they’re only doing it from sunrise to sun fall. Every box contains a recorded guitar note, programmed to play in a loop, continuously. Because of different loop lengths, the sounds overlap, thus enabling he whole piece to slowly develop. Below you can watch and hear the actual sound of the sun:

Matt Jackson has found an exquisite way to compose electronic music. He collaborated with the Community Music Wales organization into the Stats in Sound project. There, he created  an algorithm which produces music out of data received from monitoring plants. 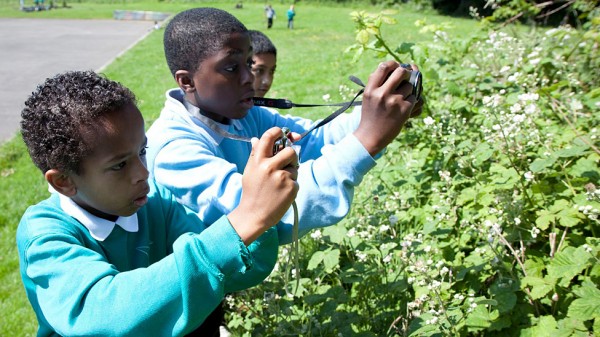 He gathered data from the photosynthesis process in a project that aimed to blend more areas (technological, musical, media arts and, of course, science) in an effort to raise awareness on sustainability and environmental issues.

He measured temperature, light levels moisture and humidity. These data went into the algorithm mentioned above and came out as electronic songs. Give the samples a listen on the BBC Interview for the project.

While composing, Matt Jackson discovered that plants kept in poor conditions would have a slower tune, while at the opposite end, the ones kept in favorable conditions, would unveil an upbeat melody.

Peter Larsen, a biologist for the US Department of Energy’s Argononne National Laboratory has found an amazingly awesome thing to do with germs. He has collected tremendous amounts of data from them just to assemble them into music. Check out the cool audio below – the sound of algae, bacteria and other microorganisms.

You might hear different melodies. This is not a mistake, but a way to highlight the groups of microbes. There number fluctuates throughout the year. Environmental conditions become an interpretation of the chords and key played.

Great, right?! We didn’t know germs could “sing”, either.

These are what we consider to be few of the most interesting and special music making techniques.

Do you know another one just as or even cooler? More, are you a composer? Then, don’t keep silent, speak out!

Share your opinion below! We’re having all the fun in the comments area!

Written with love and coolness by Wady Bwug on October 17, 2014 in Cool Stuff How do you rate this article?